This past weekend Kendall-Jackson held its 16th Annual Heirloom Tomato Festival. We were joined by artisan food producers, restaurateurs, a New York Times Bestselling author, great wine, and 175 varietals of heirloom tomatoes that were really the star attraction. 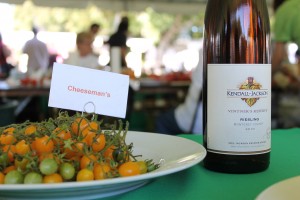 As in years past, each restaurant or food purveyor were given a booth and the opportunity to create a dish that really showcased the Heirloom tomato and pair it with a wine. The 2,500 people who joined us were all given a token they could use to vote for their favorite dish. After all the votes were tallied, this year’s winner of the People’s Choice Award was Monti’s Rotisserie for its Tomato Tarte Tatin. 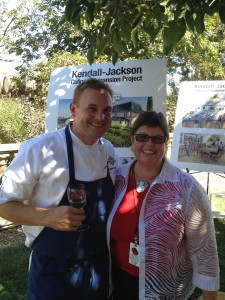 We were also fortunate enough this year to be joined by Debbie Macomber, New York Times Bestselling author, who was gracious enough to be our Celebrity Critic. Her favorite dish of the day was the Fried Green Tomatoes from the Sheraton Sonoma County.

The Tomato Festival wouldn’t be complete without our Executive Chef Justin Wangler competing in the annual Chef’s Challenge, a single elimination tournament with chefs competing against one another to see who can create the dish that best showcases the tomato. We were fortunate to be joined by former Top Chef Cheftestants Eli Kirshtein, Ryan Scott and Casey Thompson. 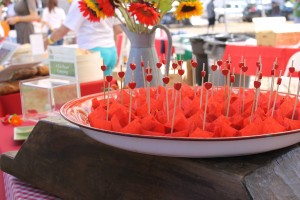 In the first round, Executive Chef Justin lost a close contest to Chef Eli; meanwhile, Chef Casey squared off against Chef Ryan. After another close decision, Casey won the round was prepared to cook against Chef Eli for the crown.

The judges said it was the toughest round to judge. As Justin Wrangler prepared to hand over the trophy, the judges announced Casey as the winner. The smile on her face said it all and graciously shared the spotlight with Kendall-Jackson Sous Chef Tracey Shepos-Cenami, who worked with her throughout the challenge. 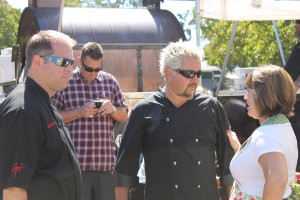 As the drama wrapped up and as Chef Casey hoisted her magnum into the air, the crowd continued to circulate, tasting some of Sonoma County’s best food and wine and may have been surprised to run into Chef Guy Fieri at his Johnny Garlic’s booth. Chef Fieri has joined us the evening before as part of the Chef Tables In The Vineyard event, a one-of-a-kind benefit for the Cooking With Kids foundation.

For many this has become an annual must-attend event and for others, this was their first time attending. Either way, we are sure no one left disappointed. A great day – perfect weather, amazing food and wine pairings, great musical entertainment provided by The Carlos Herrera Band, wine seminar tents and exciting chef challenges. We hope to see you all again next year.