A Trip to the Gardens

It’s been a while since we last discussed all the latest happenings in our garden. So now that spring is officially in the air, we figured there’s no better time to get out in the garden with Executive Chef Justin Wangler and Culinary Gardener Tucker Taylor and discuss our upcoming crops. 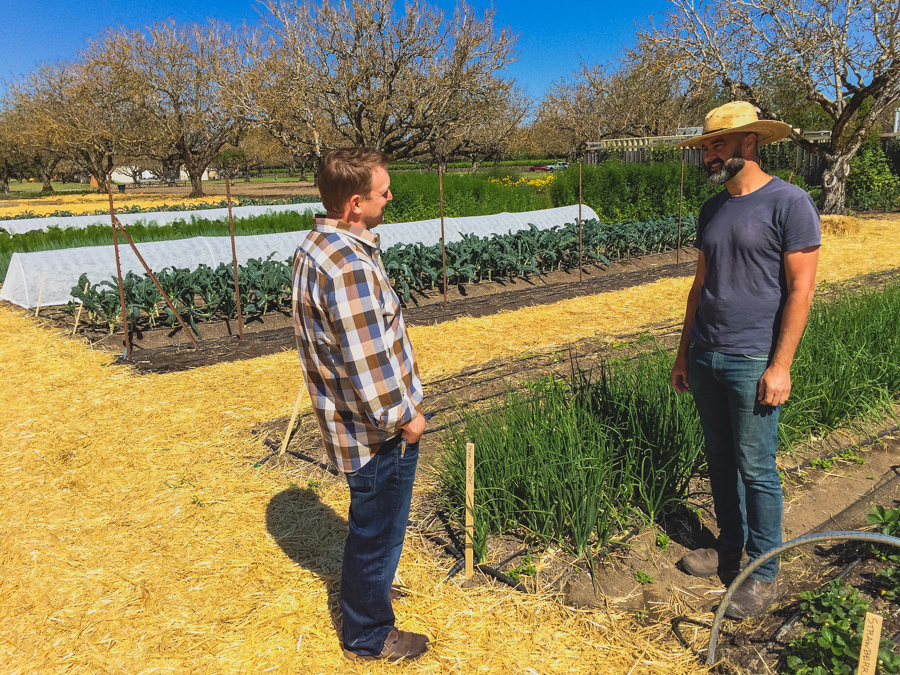 Tucker and Justin consistently work hand-in-hand to develop the freshest ingredients, which Justin and his talented team later utilize in our state-of-the-art kitchen. There are definitely some advantages to having a stellar culinary garden located just steps away from the kitchen. 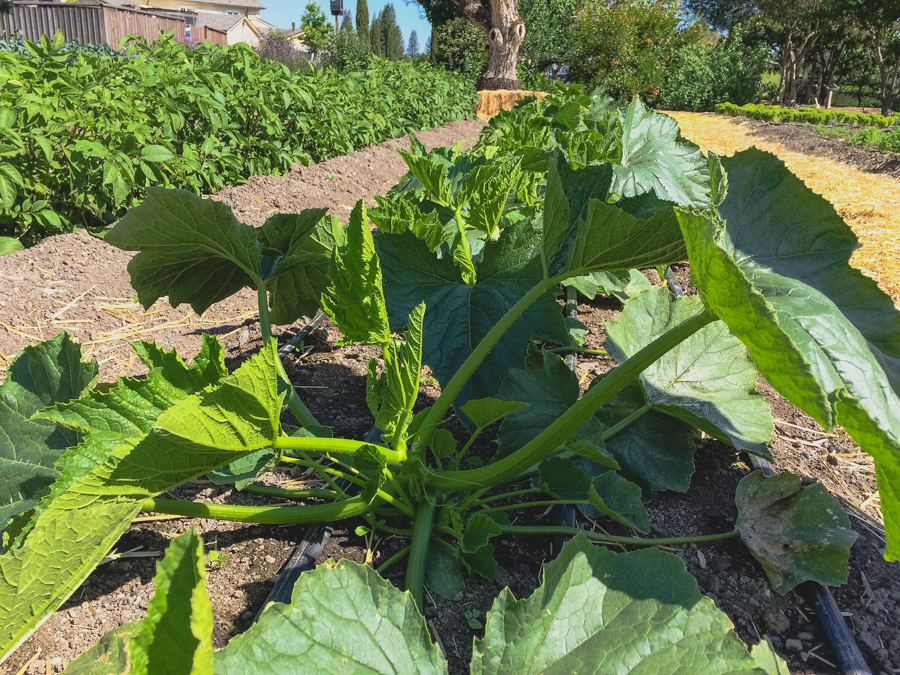 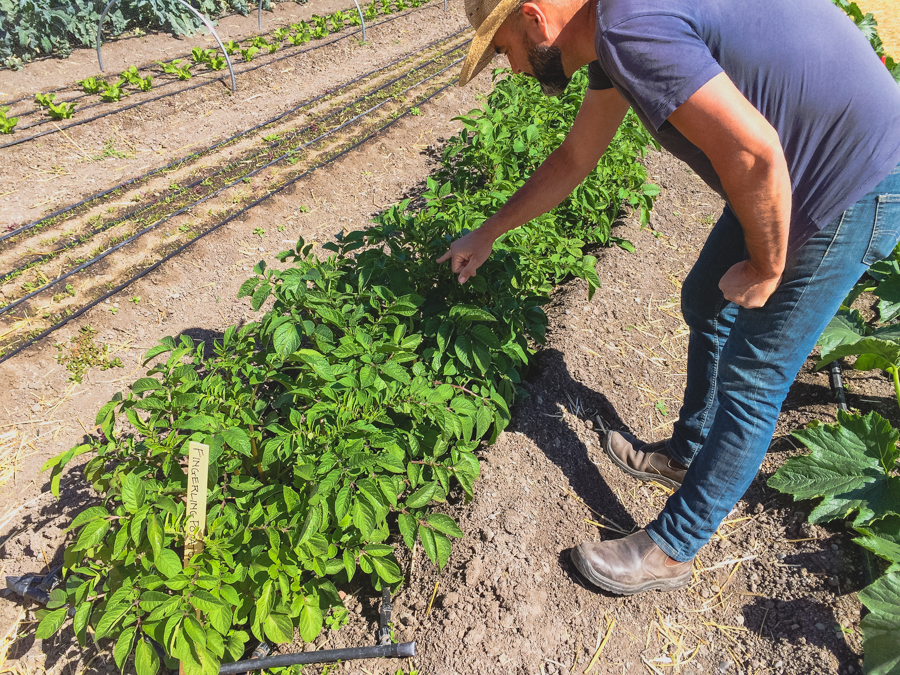 As we checked on the status of our fingerling potatoes, Tucker pointed out that the plant is beginning to flower, which is an indicator that it’s time to start creating a trough along the sides of the plant. The trough is the small hill of soil and compost that you see in front of Tucker’s feet (above). The goal of the trough is to encourage the potatoes to grow down the middle of the row, rather than on the sides. 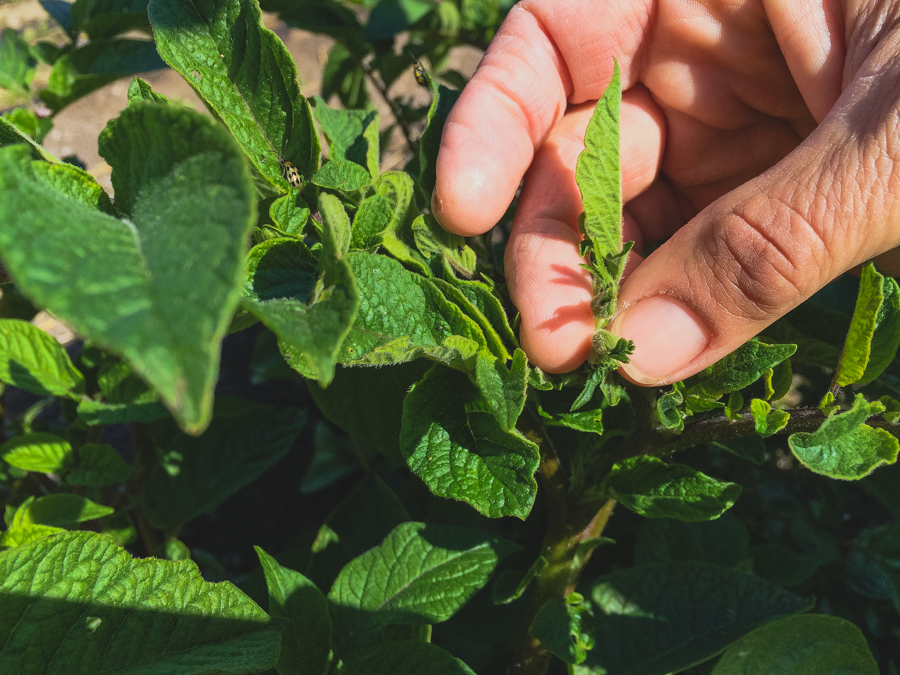 Summertime is quickly approaching — the days are getting longer and hotter and the nights are getting warmer. Once the ‘root zone’ or soil begins to heat up, the plants take that as an indication to grow faster. 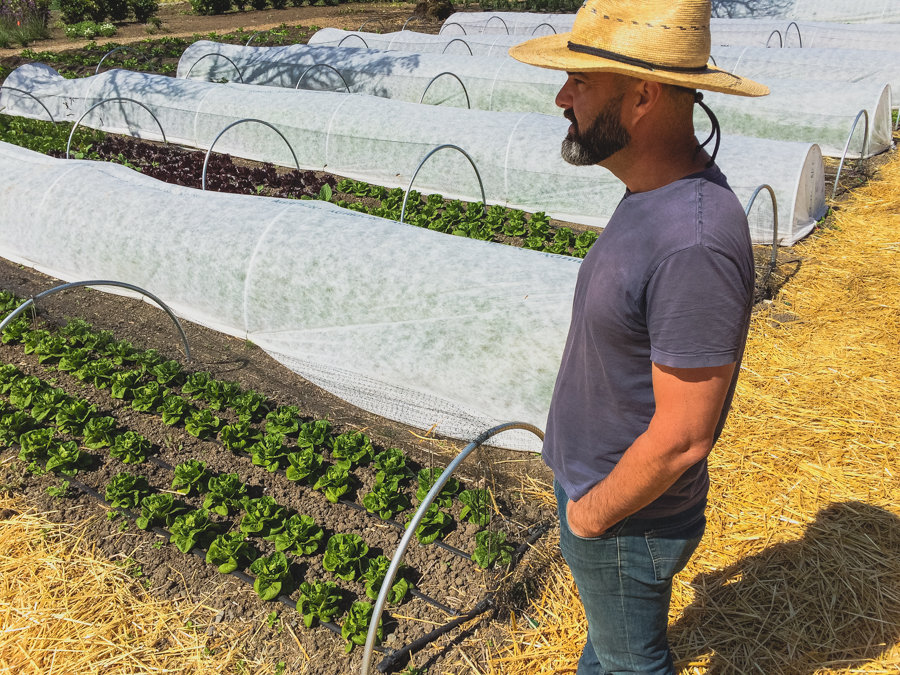 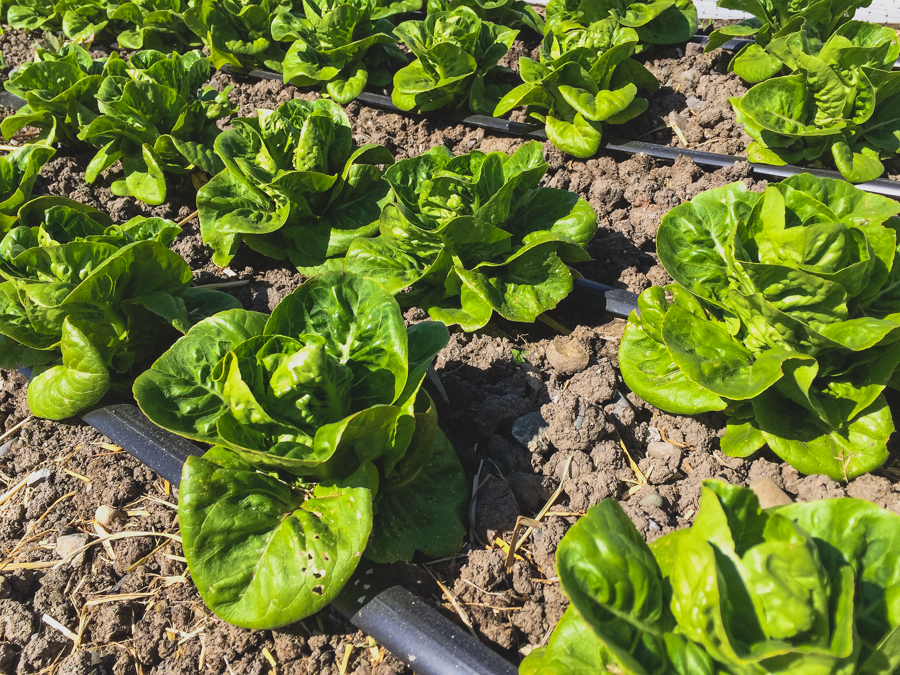 As we walked through the garden, Tucker pointed out the hedges that line the edge of our garden. The hedges have really filled-out in recent months, which is great news as they naturally attract pollinators like bees, moths and hummingbirds. They’re drawn in by the smell of the hedge and then make their way into the garden to continue pollinating our crops. 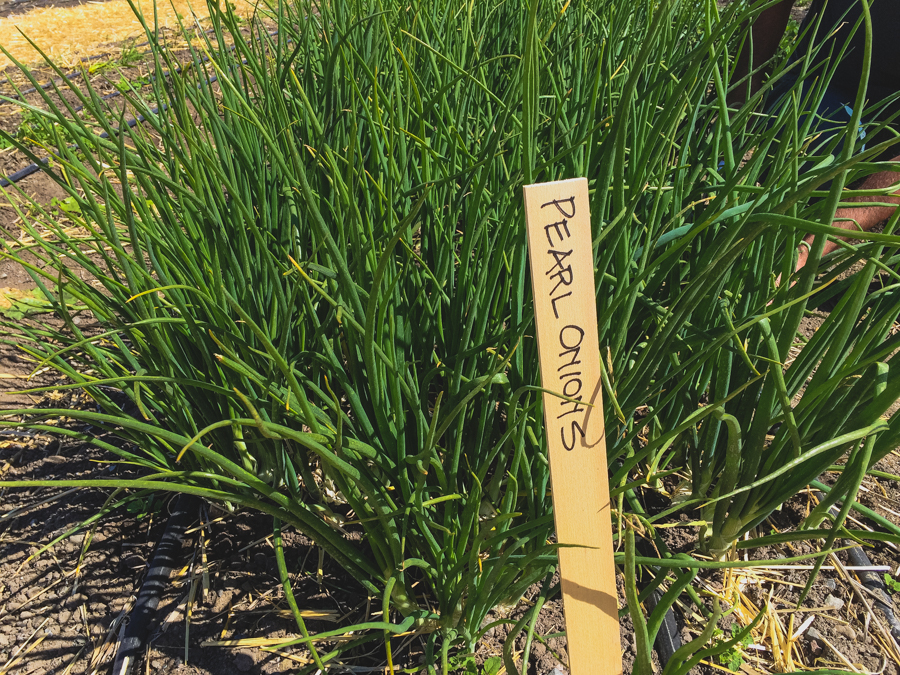 Chef Justin stopped by the pearl onions — one of his favorite onions to work with. We asked why he likes using them and he said he loves to cut them in half and pan sear them for bit to bring out the sweet flavors — plus they look stunning on a plate! 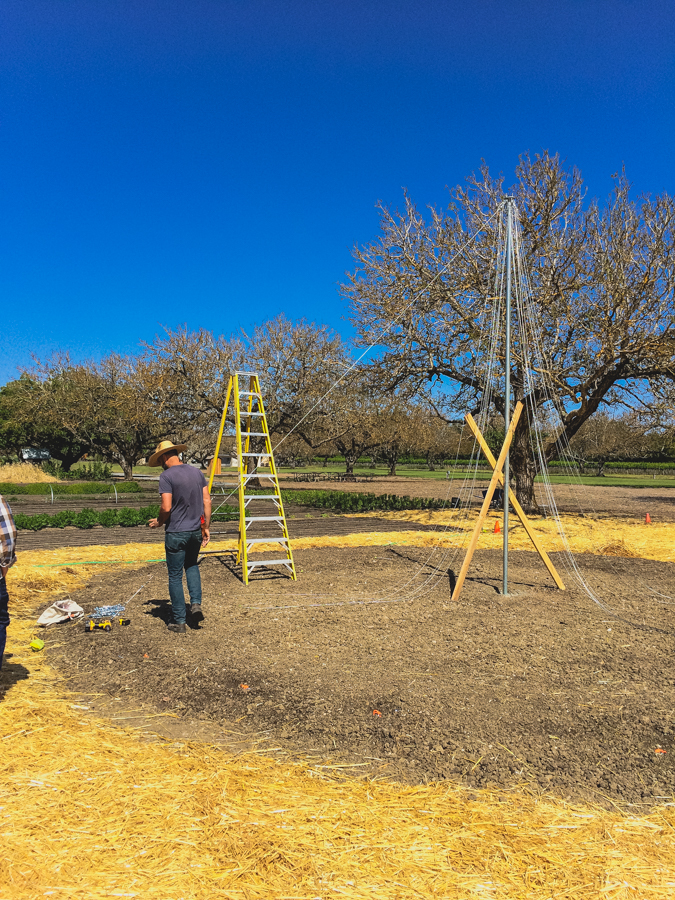 As we headed towards the backend of the garden, we immediately noticed the assembling of this large structure (above). Chef Justin informed us that it would be for our hops. No, we’re not going to be making beer (although, the hops are the same that are used to make beer). Chef Justin plans to use the hops to create a delicious pesto in place of basil leaves. Yum! 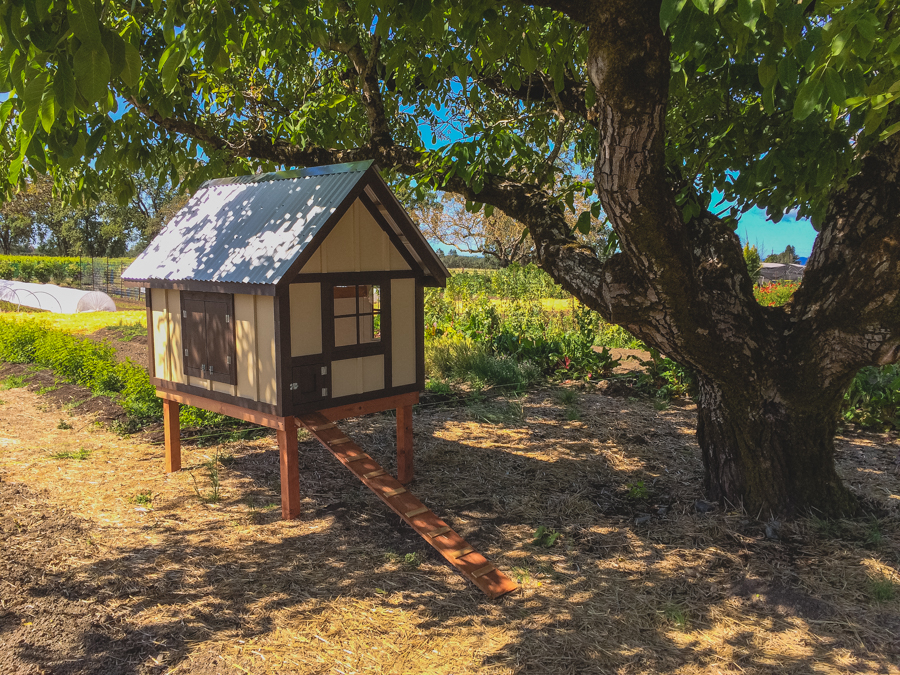 Oh, and did we mention that we’re getting chickens?! Okay, so maybe we don’t have chickens just yet but in just a few weeks we’ll have 15 Bantam-Cochin chickens living in this adorable henhouse. These chickens produce small eggs, which are great for serving and if you feed them kale, the yolk turns a dark orange color.

On our way out of the garden, Tucker pointed out some beautiful pineapple guava flowers, which he immediately picked and then pulled off the edible pedals for us to try. They were DELICIOUS! Sort of a fruity, guava and black licorice flavor.

Chef Buttercup has been known to make a puree out of them and use them in his amazing desserts.