Glorious days, these.  The grapevines absolutely love these hot days, and we are finally racking up some heat accumulation.  So, the vines have been growing like crazy and the grapes are starting to size up.

Heat accumulation is critically important for the grapevines, without it we’d be hard pressed to get anything into the bottle. As I have mentioned in previous posts, the transitions from dormancy to budbreak, to bloom and veraison and finally to harvest are dependent on accumulation of heat.

One common scale of measurement is called the degree day.  Grape growing regions around the world can be characterized by their typical range of degree days.  Check out this link to learn about the Sonoma County Climatic regions.  Here in Northern Sonoma County, we consider Alexander Valley and Knights Valley to be Cabernet country because we can count on an average of 3000 Degree days or more. 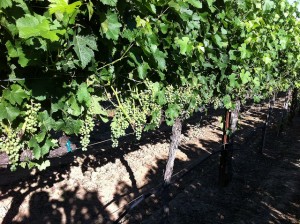 Weather up until the beginning of June was very worrisome, because we weren’t accumulating the heat required to ripen grapes in the normal growing period (before the late October rains set in).  All this warmth, and absence of morning fog influence, has helped us to catch up a bit.

Now is the time that we need to get into the vineyard and remove leaves around the clusters in order to expose them to sunlight.  This is important for a couple of reasons.

First, getting the green grapes acclimated to the sunlight will help them build up natural protection against sunburn.  I mentioned above that we’ve been without the morning fog typical to this area for the past month.  This is tremendously beneficial, especially in evaluating the potential of this growing season.

One of the biggest problems with the heat waves we experienced in 2010 was because there was insufficient acclimatization to sun and high heat.  I remember noticing that we were almost always under the fog layer until noon or later.  This fog shielded the grapes that normally would see sunlight from any exposure, and the result was heavy damage when we finally saw some heat and extended periods of sun exposure.

The second reason degree days are very important is because they contribute to flavor development, especially in the Sauvignon family of grapes (Sauvignon Blanc, Cabernet Sauvignon, Cabernet Franc and Merlot).  These varieties produce significant quantities of a class of chemical compounds called pyrazines.  These are the same compounds responsible for the flavor of bell peppers.  This is fine if you are a pepper, but it is not particularly attractive in wine. Viticultural research in California proved that increased sun exposure caused this character to disappear.  So we remove leaves to promote that exposure.

Based on the past couple weeks, this is one winemaker who is starting to feel optimistic about the 2011 harvest.