The Oak Chronicles: At The Stave Mill

Our third day dawned to the sound of French birds (yes, they do sound different from the ones I’m accustomed to in California) and a thankful lack of rain. Coffee, croissants and cheese again — ah, how I love petit dejeuner in Europe, and now I’m raring to go.

Today we were scheduled to visit Merrain International’s stave mill outside of Épinal, a venture in which we have a business stake, a wise thing if one needs lots of oak staves for barrels. Kendall-Jackson’s barrel program is anchored on a consistent supply of very high quality staves (the pieces that make up an oak barrel), from France and, to a lesser extent, America. 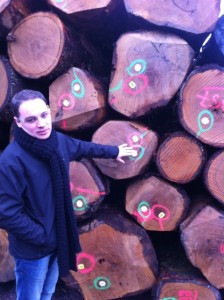 We arrived at Merrain International and were greeted by Jean-Marc, the managing director. An affable, intelligent young man, Jean-Marc was raised nearby and explained that the region is known for its wood products—furniture, siding and staves among them—and the accompanying trade had been perfected by the generations before.

Little wonder then that he knew so much about oak, a real benefit in the highly competitive world of wine barrels.

As we began to tour the facility, the complexity of the stave mill’s operation became apparent. Enormous oak trees are tattooed with intricate markings; large stacks of staves air dry in the ‘yard’; lasers are used to mark exact stave cuts, and so on. Jean-Marc and his crew perform a complex orchestral arrangement each day to produce the highest quality staves possible. 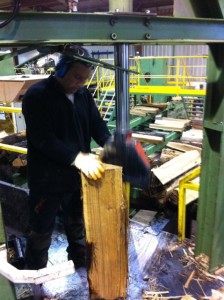 As you might imagine, each stave has a story, especially at a mill like Merrain International, where the devil is absolutely in the details. Every stave is marked with a code that provides a traceable identity that includes origin, aging time, size and weight. All in all, an intricate narrative designed to make a perfect 60-gallon barrel, which will act as wine storage for a mere four years time—the average span of time that a barrel is used.

After our extraordinary tour, Jean-Marc led us to the guest-house on the property for lunch. We sat down to foie gras (naturally!) and Condrieu as we talked over what we’d seen.

The conversation turned to the basic building blocks of staves and barrels—the wood. We learned that the importance of origin is up for debate – there is a lot of competition between the many oak forests of France. “Oak from the Vosges is absolutely the best,” said one of Jean-Marc’s colleagues. “Mais non, it is the oak tree itself, how it is grown and selected that matters most, not the region,” someone else would counter, and so on. 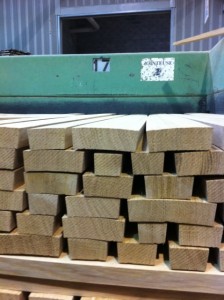 I began to realize that Jean-Marc embodied a hybrid of philosopher and engineer, the perfect equation for stave production; the staves that make up an oak barrel must be perfect in weight and size in order to produce a leak-free, flavorful, complex vessel. The grain must be tight and straight, without any knots. And then the alchemy takes over, the history of the ancient oak and outdoor ‘conditioning’ in the yard coupled with the message of the wine, conveyed through its vineyard and its winemaker.

And so went another glorious day of hanging out with French wood geeks. More to come.