Kendall-Jackson’s Rick Tigner and Undercover Boss today took to the stage in Southern California to promote the hit CBS show at the winter gathering of the Television Critics Association.

Our boss, Rick Tigner, president of Kendall-Jackson Wine Estates, along with the CEOs of Diamond Resorts International, The Dwyer Group and TaylorMade, all talked to the crowd about their experiences on the show – and what they learned from their time on camera. 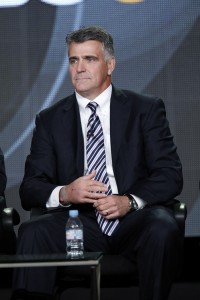 For us, the chance to appear came at a particularly emotional time. Jess Jackson passed away shortly before filming of Undercover Boss began. It’s something Tigner was particularly aware of when he talked to the press at TCA ’12.

“We were in a transitional period and this show could not have come at a better time,” he said. “It helped rebuild morale in the company.”

Now, with Kendall-Jackson’s appearance on Undercover Boss on January 29th, we can’t wait to share our story with you. As Rick likes to say, he did some funny stuff on the show and he did some sentimental things on the show too. But you’ll get to learn about Kendall-Jackson as a family-owned and family-run company and all the care that goes into handcrafting our wines.

If you’re familiar with CBS’s Undercover Boss then you’ll probably know that people usually end up crying. We’re not saying whether or not that’s the case with our episode, but you can bet there’ll be some touching moments. (Still, you might want to have a box of tissues on hand.)

So tune in to CBS on January 29th at 8/7pm Central and watch Rick Tigner and Kendall-Jackson on Undercover Boss.