But I also asked my own questions and learned quite a bit about the South Korean market. Similar to the US, the millennial generation is becoming more interested in wine, and lifestyle publications are reaching out to an audience that is eager to learn. I hope that by speaking to these magazines I might play some small part in helping young women in South Korea learn about wine. 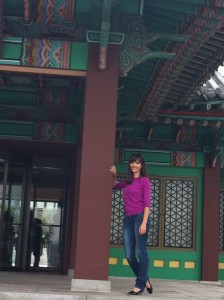 Like China, South Korea is an up and coming wine market that drinks a lot of imports. In the last decade, wine consumption in South Korea has grown by more than 175%, while total wine imports from January-June 2011 totaled $60.2 million, a 13% increase from last year. South Korea is a sophisticated market, making it a great opportunity for California wineries to jump into.

How is it sophisticated?

Unlike other emerging wine markets, South Korea already has a well-established distribution system to support its growing demand for wine. On October 12th, the US Congress passed a new free trade agreement that will be especially beneficial to California’s wine industry.

I look forward to visiting South Korea again and can’t wait to see how its awareness and knowledge of California wines grows.