I feel like I’ve been traveling backwards in time lately. I’ve been in the present thinking about the 2012 Harvest, but there’s been a lot of time spent looking backwards, working with older vintages that are still very much present today.

Let me explain. First there’s the 2012 vintage to worry about. Yes, the 2012 vintage.  Weather will be a concern this Harvest, again.  I think that’s certainly one of the constant truths of winegrowing.  There’s always something weather-wise to worry about.  Last year it was too much rain, a cool growing season, early fall rains.  This year, it’s no rain (hardly a drop) so far.

With the weather acting the way it is, and an eye already toward the 2012 Harvest, I’ve been in the vineyards a lot.  My vineyard managers are already pruning and reviewing the vineyard work that has happened in preparation for the new vintage.  We have learned a lot from the last two seasons, both challenging vintages from a grape growing perspective. We’ve adapted in the vineyards and changed our expectations for a “normal” vintage in California. 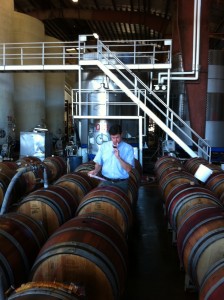 There’s also the 2011 vintage.  Yes, remember that one?  Those wines are all finishing up the secondary fermentation and are slowly being tucked away for routine barrel aging in our cellars.  This means for a lot of work, but it is a crucial step in the winemaking process, one that we take very seriously.

I’ve also been going even further back in time. Not to brush the 2011 vintage aside so quickly, but I’ve been more concerned with the 2010 lately. Bottling began on the 2010 Kendall-Jackson Vintner’s Reserve Cabernet Sauvignon this week;  I’ve been consumed with making sure that this wine was ready for the first bottling.

Finally, there are the 2008 and 2009 vintages to keep in mind; these are the current vintages in the bottle. I had the opportunity to show the 2009 Grand Reserve Sauvignon Blanc and Chardonnay and the 2008 Grand Reserve Merlot and Cabernet Sauvignon to a group of wine buyers from a restaurant group today.

While we can’t change the wine at this point we can always learn. When I open a bottle there is an expectation of what the wine will taste like. The learning comes in seeing how it has evolved over the time since it went into a bottle, which was the last time I tasted it.

Wine continues to evolve and changes over time in the bottle.  The decisions I make at every point in the winemaking process have an implication on how that eventual taste will appear in the hands of the wine consumer.

This always brings the work we put into the winemaking process into the forefront of my mind. From planning for Harvest in the vineyards in February to finalizing the blend to tasting it with friends and customers, winemakers are always working to perfect their craft and prepare for the next vintage