For the rosemary ice cream:

For the spiced apple filling:

For the sugar drop biscuits:

To make the rosemary ice cream: In a pot, combine the milk, cream, and rosemary and bring to a simmer over medium heat. Remove from the heat, cover, and let infuse for 20 minutes. Meanwhile, whisk together the sugar and egg yolks until well blended.

Fill a large bowl halfway full with water and ice. Remove the rosemary sprig from the pot, return the infused milk to the stove top, and bring it back to a simmer. Remove from the heat and slowly pour it into the egg yolk mixture while whisking constantly until thoroughly mixed. Pour the mixture back into the pot and cook over low heat, whisking constantly, until the temperature registers 180°F on an instant-read thermometer. Remove from the heat and pour through a fine-mesh sieve into a heatproof bowl. Nest the bowl in the ice bath until the ice cream mixture is cool, then cover and refrigerate overnight.

The following day, place an airtight container in the freezer to chill. Pour the ice cream mixture into an ice cream maker and freeze according to the manufacturer’s instructions. Transfer to the chilled container and freeze for about 2 hours, until firm, or store for up to 3 weeks. If the ice cream is hard when ready to use, let it sit at room temperature for 10 to 15 minutes to soften slightly before serving.

To bake the apples: Preheat the oven to 350°F. Line a half-sheet pan with aluminum foil. Peel, halve, and core the apples, then cut lengthwise into slices 1/8 inch thick. Put the slices in a large bowl. Add the lemon zest and juice, butter, tapioca flour, granulated sugar, cinnamon, nutmeg, salt, and 6 tablespoons water to the apples and toss to coat evenly. Spoon the apple filling into a 10-inch cast-iron skillet. The skillet should be full, which is fine as the apples will cook down. Place the skillet on the prepared sheet pan and bake the apples for 40 to 45 minutes, until bubbling.

Meanwhile, make the biscuit dough: In a stand mixer fitted with the paddle attachment, combine the flour, both sugars, baking powder, and salt and mix on low speed to combine. Add the butter and beat on medium speed until fully incorporated. Add the cream and beat just until the dough comes together in a shaggy mass. Remove the bowl from the mixer stand.

To bake and serve the cobbler: Once the apple filling has started to bubble, remove the pan from the oven. Using a 13/4-inch (#30) ice cream scoop, scoop the biscuit dough on top of the apples, starting at the side of the pan and working toward the center. Gently brush the dough with the egg wash and sprinkle evenly with the cinnamon sugar. Return the pan to the oven and bake for 25 to 30 minutes longer, until the dough is golden brown and cooked through. Let the cobbler cool slightly before serving. Serve warm, with the ice cream. 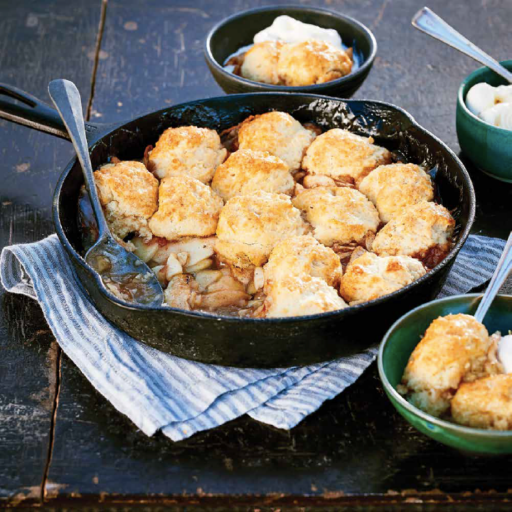