There’s not much better than local honey. At the Kendall-Jackson Wine Center, we keep bees around to help pollinate our flowers and for their delicious honey. Chef Eric Frischkorn just helped one of our beekeepers harvest some wine. Check out his story. – Justin

I’ve always been interested in honey and how it is harvested, so I recently tagged along with a beekeeper to collect the honey at the Kendall-Jackson Wine Center. I’ve never done this before, so I was a little nervous. 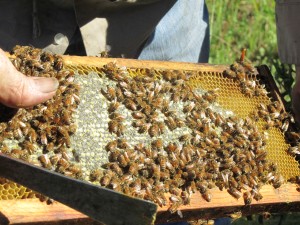 As I stood at a distance, the beekeeper told me I needed to come closer to the bee boxes. The beekeeper, a seasoned character, said a bee suit was not necessary and that a helmet was all I needed. When I asked him when the last time he got stung was, he said nonchalantly, “about 2 hours ago.”

I put on my helmet and he lit the smoke box. I learned that the smoke disrupts the communication among the bees, so they don’t go into attack-mode all at once. The beekeeper opened the box which happened to be when I noticed the huge hole in the netting of my helmet. 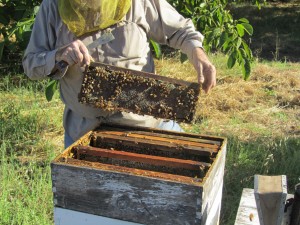 He removed the first screen and hit it on the side of the box to knock the bees off – instantly bees were everywhere. The beekeeper told me each bee box contains a staggering number of bees – up to 75,000.

As the buzzing got louder and louder, I slowly walked away from the box and pulled my helmet off. Just then, the beekeeper yelled at me, “calm down, they can sense fear!” I eventually managed to pull it together and we collected a whole lot of the honey. It was a sweet experience.

Below is one of our favorite recipes using honey and peaches. This toast is great paired with Riesling.

Method
Brush bread with olive oil. Season with salt and grill over medium-high heat until golden brown on both sides. Remove bread from the grill and top with sliced peaches. Drizzle with honey and olive oil. Sprinkle with sea salt and garnish with basil leaves. Serve immediately. 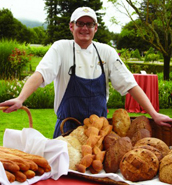 Chef Eric Frischkorn is graduate of the International Culinary Academy in Pittsburgh, PA. He has worked under Michelin-Star chefs, as well as in kitchens across Europe. He developed the bread program at the Kendall-Jackson Wine Center and is also responsible for its amazing Caramel Corn.