The funny thing about our Kendall-Jackson Jackson Estate Cabernet Sauvignon is that the label has to bear an “Alexander Valley” appellation.

Some “valley!” Most of the vineyards that comprise the wine — Cougar, Hawkeye, Alden — are up in the mountains, while the other two — Jimtown and Peline — would be classified as benchlands (to borrow a term our founder, Jess Jackson, loved).

Why would you call someplace where the altitude can give you a nosebleed a “valley?”

Well, that’s a long story. Let’s just say that the U.S. Treasury Dept., which is in charge of these things, moves in mysterious ways.

The hills, slopes, benches and mountains where the grapes come from all are part of the Mayacamas range and its foothills. Just on the other side, to the east and south, is Napa Valley. It can be hard for an amateur to tell the difference between a west-facing Mayacamas Cabernet, like ours, and an east-facing Mayacamas Cabernet from Napa. Experts point to the tannins: drier, dustier, a shade more herbal than in warmer Napa Valley. More like Bordeaux, and thus more elegant.

The Mayacamas, of course, are part of the Northern Coast Ranges, those golden hills that extend from Humboldt County down to Salinas, parallel to the coast. Formed from ancient volcanoes, uplifted by millions of years of tectonic activity, they’re comprised of solid granitic bedrock, overlain with the red soils associated with decomposed, weathered, iron-rich lava. This is why these mountain Cabernets show a tangy grip of minerals. 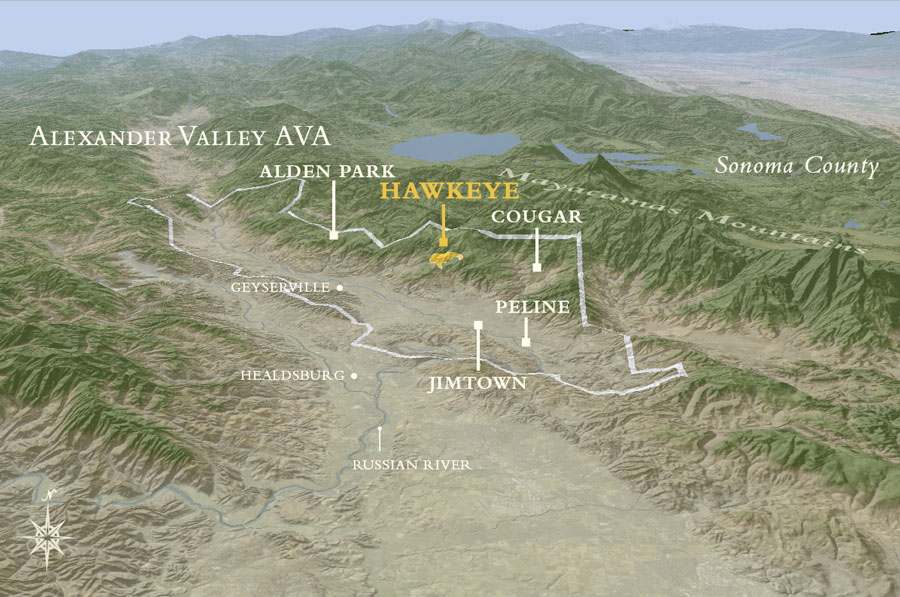 If you’re detail-oriented, you’ll like knowing that the Jackson Estate Cabernet Sauvignon was aged for 18 months in one-third new French oak, an amount that adds balanced tones of vanilla and smoke. It has bracing acidity, and will age gracefully for many years.

If you’ve never been high up in the Mayacamas on the Alexander Valley side, you should try to get there sometime. The views are stunning: the entire Alexander Valley stretches below you, with the Russian River tucked away in a dark green shadow of riparian tangle. On a clear day, you can see all the way to San Francisco. That’s key to the climate: summer days are warm and sunny, but at night, the maritime incursion brings temperatures rapidly down. However, due to the elevation, days are cooler and nights are warmer than on the valley floor below. Cabernet loves that consistency.

Jess Jackson loved these mountains. He planted only a fraction of his Alexander Valley property; the rest he left pristine, with corridors through which the original inhabitants — cougars, bears, deer, boar and other critters — could roam freely, as they have for thousands of years. Somehow, the wine from these hills seems to reflect a particular wildland sensibility.

When we tasked our Winemaster, Randy Ullom, with creating the finest appellation-based Cabernet he could from our coastal California vineyards for our new Jackson Estate tier, he immediately turned to these wonderful hills. We believe the wine reflects the essence of mountain-grown Alexander Valley Cabernet Sauvignon. We think you’ll agree.