Earlier this week I wrote about a new technique I heard about on the radio for keeping the Thanksgiving turkey extra moist. The method is so simple it’s amazing we all haven’t been doing it for years. According to Harold McGee, all you have to do keep breast meat moist is put an ice pack on the bird before you roast it.

One common complaint I hear around Thanksgiving is that, as much as we all love mom’s cooking, the white meat always seems to be overcooked and dry. You see, the dark meat on the bird comes up to temperature significantly slower than the breast meat, so by the time the turkey is “ready” a large part of it is actually overcooked. By using an ice pack to lower the temperature of the turkey breast, theoretically, you’ll even out the cooking process and end up with perfectly cooked dark and light meat.

So, with a bottle of Kendall-Jackson Vintner’s Reserve Chardonnay close by, we thought we’d give it a try here in the Wine Center kitchen. 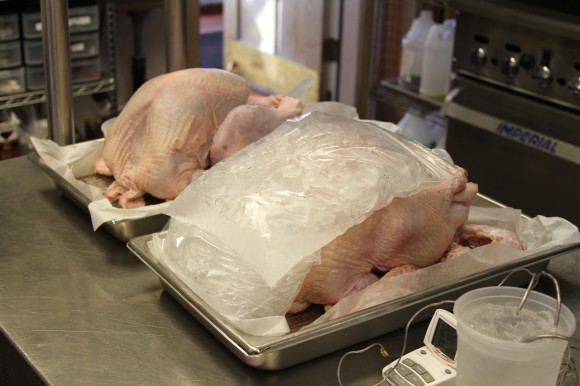 Here are the two birds, which both weigh 15 pounds. The one without the ice pack is the control bird that we planned to cook normally. We let both birds come up to room temperature, then set the ice pack on the McGee-method bird for about 15 minutes. 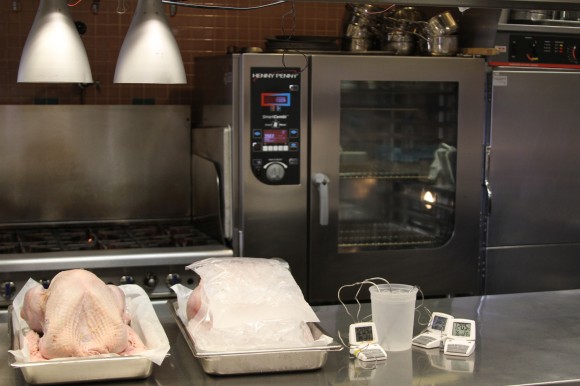 Once the birds were in the oven, we used the  three probe thermometers shown here to measure the temperatures while the turkeys roasted in our Henny Penny convection oven. 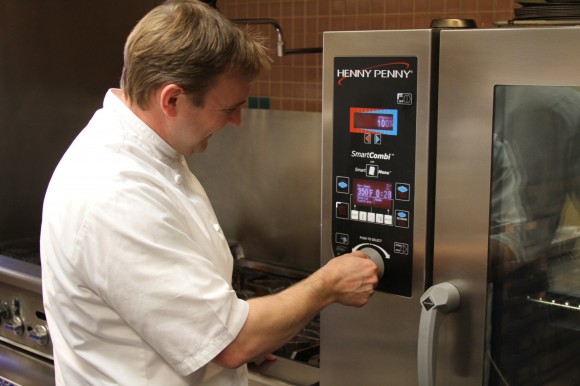 We set the oven to roast the turkeys at 350 degrees. 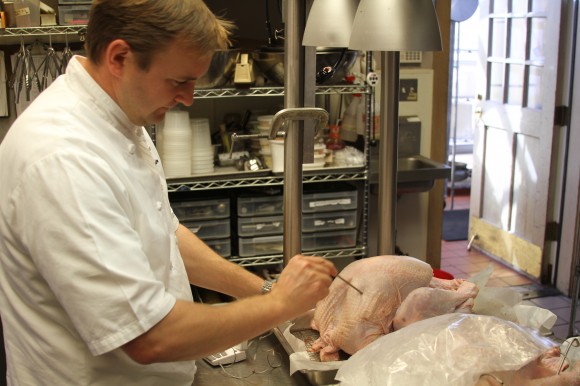 Both the control turkey and the McGee-method turkey had a thermometer placed in the breast. 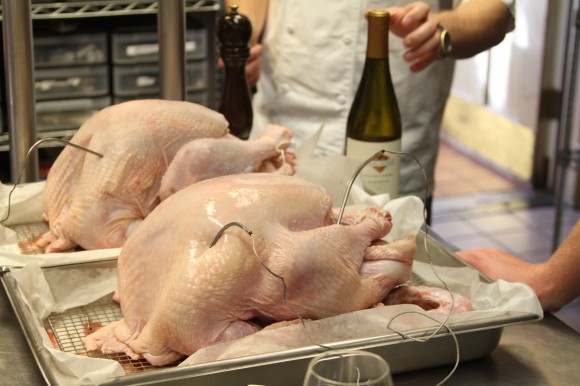 Then, the McGee turkey had a second thermometer placed in the thigh. 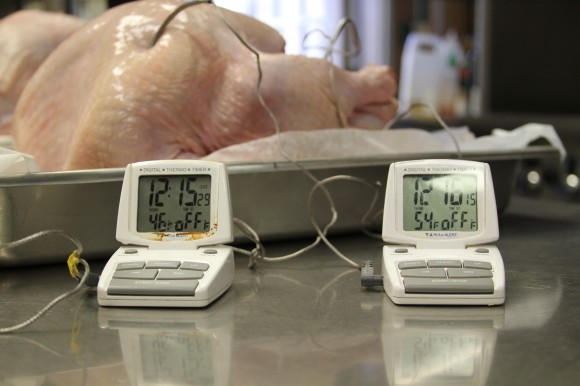 There was a eight degree difference between the breast meat and the thigh meat in the McGee turkey right before the birds went into the oven. 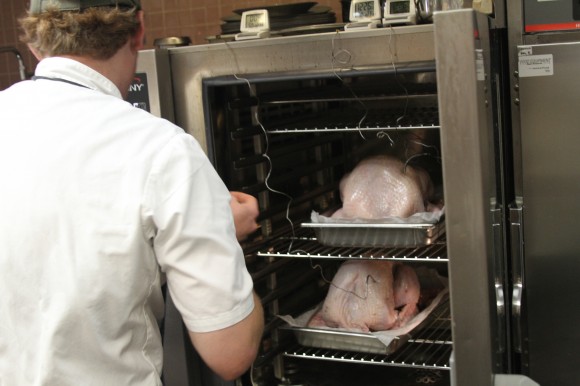 Chef Eric Frischkorn (of Mama Frischkorn & Her Amazing Caramel Corn fame) joined me to finish getting the turkeys situated in the oven and ready to roast. 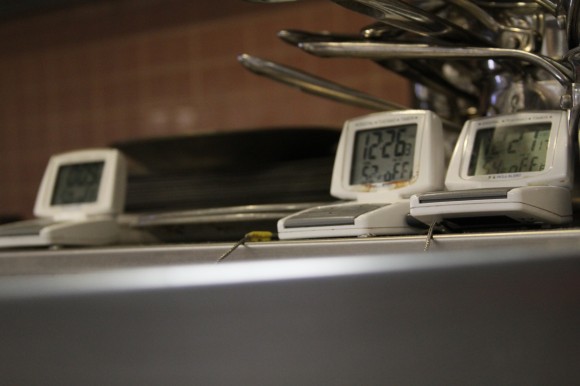 We ended up roasting both turkeys for a little over two hours. (Remember, our oven is probably different than yours. So before you get ready to carve that bird and serve it to your family and friends, make sure you check the temperature.) 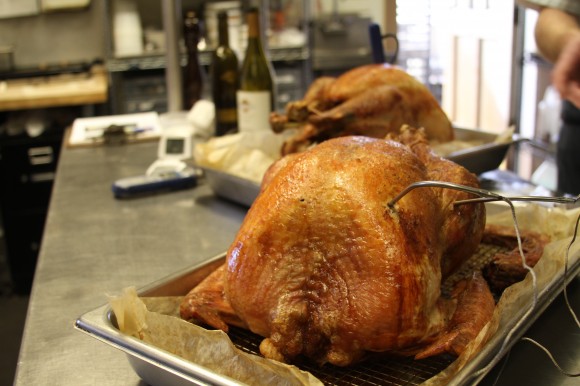 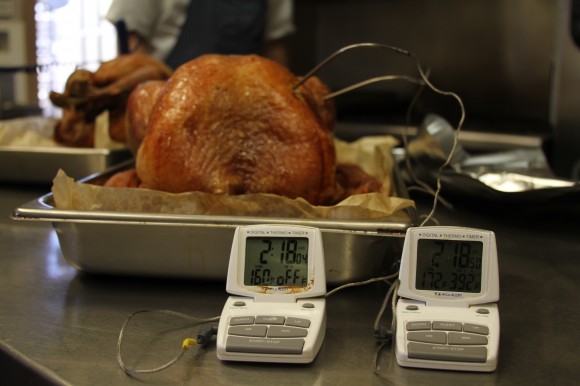 If you squint, you can see that the McGee turkey’s breast thermometer is reading 160 degrees on the nose — after we let it rest for a few minutes — while the dark meat is at 172 degrees. 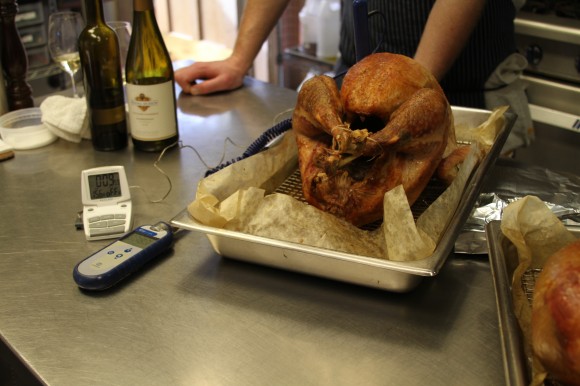 Here’s our control turkey, which also looks really good. It’s fresh out of the oven and the temperature of the bird is still coming up to 160 degrees in the white meat. 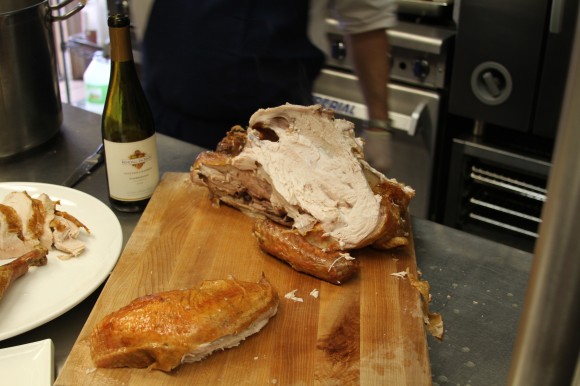 The meat was moist and delicious in both turkeys. But as you’ll see, the McGee-method added a little something extra to the tenderness of the turkey that has convinced me to cook my meal using a few ice packs. 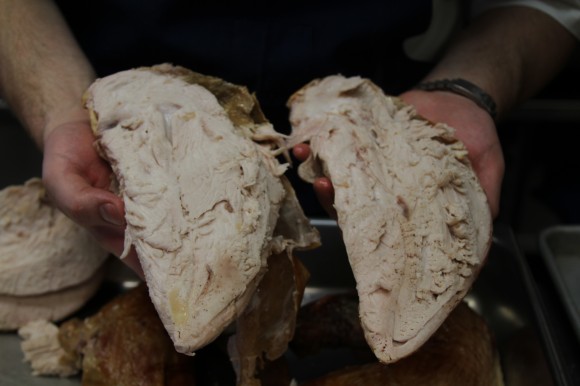 Here’s another close up of the white meat carved off the top of each turkey. Notice how much juicier the breast on the right looks? That was the McGee bird. 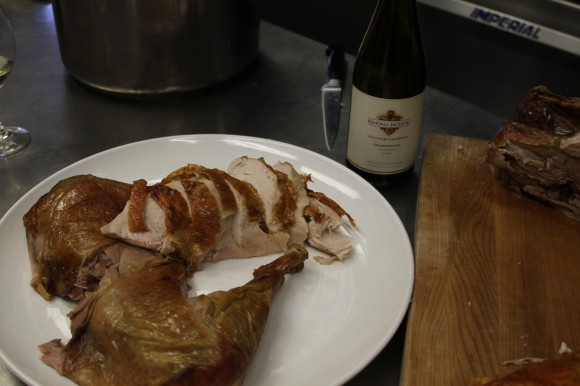 Now the last step was to finish carving the turkey and pair it with some Kendall-Jackson Vintners Reserve Chardonnay — a wine that is sure to make it to my Thanksgiving table next Thursday. We raise a glass to Harold McGee in thanks for the great tip. The turkey was delicious.

Don’t miss any of these amazing recipes, keep up with us on Pinterest.