What Are Renewable Energy Certificates?

These days more companies are buying renewable energy certificates and that means you’ll be hearing about them soon. We wanted to take that opportunity explain how they work.

We’ll explain it briefly here, but it’s a little complex so the video will help fill-in the blanks.

The energy market is a convoluted place, so it’s probably best to start at the beginning. Energy Producers sell electricity to the utility (in some cases the utility produces electricity too, but the model is the same). That electricity can come from either fossil fuel power plants or renewable sources. 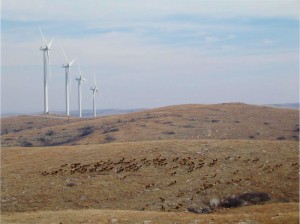 Next, the utility sells to end users at home and work. In general, renewable electricity is more expensive than fossil fuel powered electricity. Therefore utilities will only buy as much renewable electricity as they’re required to by law. They would buy more renewables if it was cheaper, but they want to keep prices down and maximize profits.

This is where RECs come into the picture. RECs are sold in 1 megawatt increments; an average home uses 6 megawatts of electricity yearly in our area. When a REC is purchased it helps fund renewable energy projects and bridge the pricing gap between renewables and fossil fuel powered electricity.

When RECs are purchased it ensures that additional renewables are being put into “the grid” on the buyer’s behalf. Since there is only so much need for electricity, the new renewable electricity entering the grid displaces the need for an equal amount of fossil fuel powered electricity.

Kendall-Jackson buys RECs for 100% of our company’s usage and on behalf of all our employees’ home usage – a first for any company.  Buying RECs, and our overall energy strategy, helped us to win an EPA Green Power Leadership Award in 2011.

This year we bought 36,000 RECs, which should put us in the EPA’s top 30 of companies using 100% renewable power. We think we’re helping make a difference. Economies of scale are kicking-in and wind power technology is getting less expensive each year. It’s only a matter of time before it’s just as cheap for utilities to buy renewables as fossil fuel powered electricity. We’re just trying to make that day come sooner than later.