Click here to see how this trip down the California coast all got started.

We set out early on Thursday morning to make sure we had enough time to evaluate the state of this season’s bloom. As we drove down the 101 highway, you could see immediately see that Santa Barbara County was unique; it’s one of the few places on the West Coast where the mountain ridge actually turns inward. This changed the landscape significantly by allowing the ocean to occupy this land thousands of years ago leaving behind rich soil and rocks that once resided at the bottom of the Pacific Ocean. 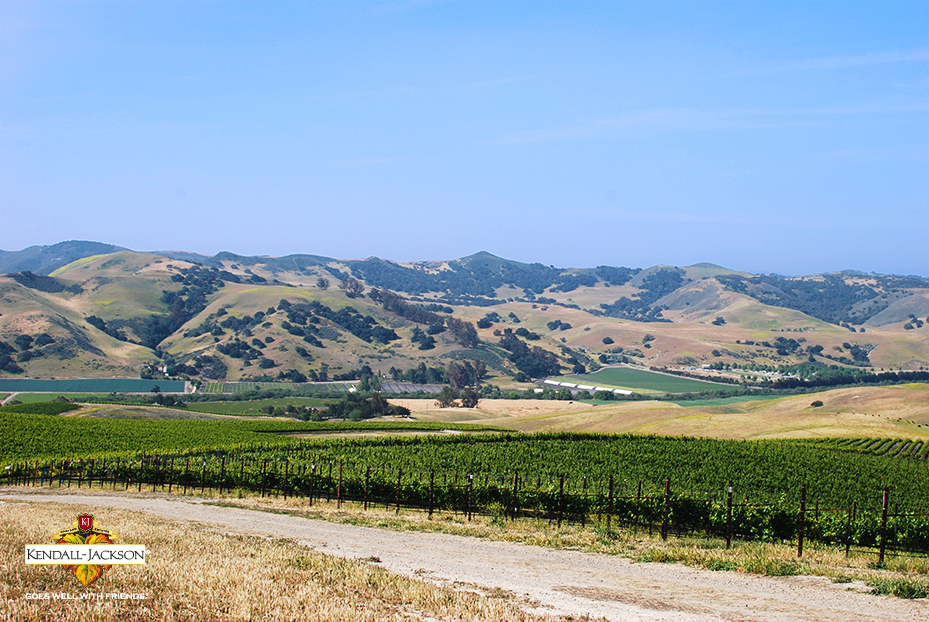 We first stopped at Jefferies Vineyard, about 10 miles inland and just outside of Santa Maria. Randy immediately drove us into the fields filled with new and old Chardonnay vines. The grapes were about two weeks ahead of schedule (which is a good sign) and definitely in full bloom! He began shaking the grapes on his hand as he examined the ‘set,’ which he explained is a good way to evaluate how healthy they are: if they fall off in his hand, then they aren’t ‘setting’ well. “Too much rain, wind and bad weather can lead to bad set.” The grapes set well and Randy seemed pleased by how large the bunches were and how many ‘shoulders’ they had. 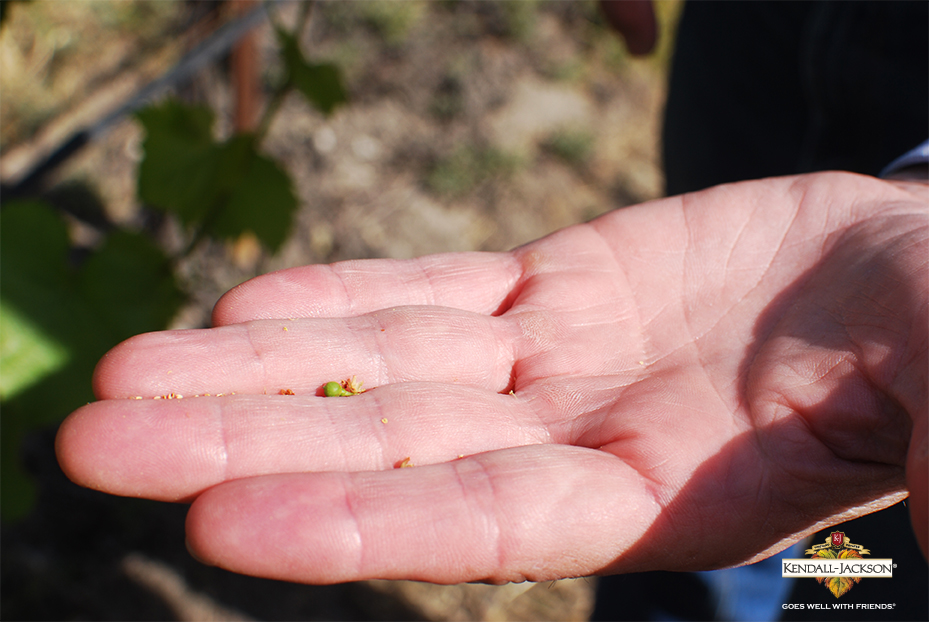 Randy noticed that the vineyard staff hadn’t quite removed the leaves from the grapes yet and they would probably begin to do this soon. I asked why and he explained that they need to do this slowly so as to avoid molding and if you wait too long — say in the middle of summer — you can give the grapes a “sunburn” and shock them. It’s best to gradually expose them to the sun and keep them dry while they’re growing. 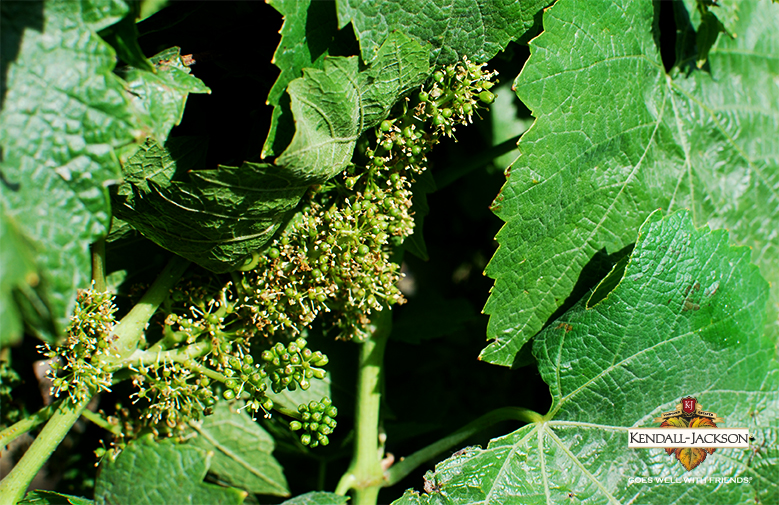 We jumped back in the car and headed to the next vineyard to evaluate the yield. We stopped atop Mission Peak and as we looked at vines and grapes, I was overwhelmed by the beauty of the area and of the uniformed vines. Randy was giddy over how bountiful this year’s bloom was looking. He stopped the car several times just to take pictures saying, “I have to document this or no one will believe me!” As we inspected the grapes Randy exclaimed, “there’s more grapes than leaves in here!” A lot can happen between now and harvest, but this year is primed to produce a terrific vintage.

As we traveled from vineyard to vineyard across the Santa Maria Valley, it was great to see SIP Certified signs greeting us at each entrance. SIP Certified sustainably farmed vineyards and wines are determined by the farmer’s commitment to protecting both natural and human resources. While we visited Los Alamos, I noticed a sign that pointed out the partnership with local Alan Hancock College in an effort to continue the education and practice of sustainable wine growing. I felt proud to work for a family-owned company that cares and is continually striving to make a difference not only now, but for the future as well. 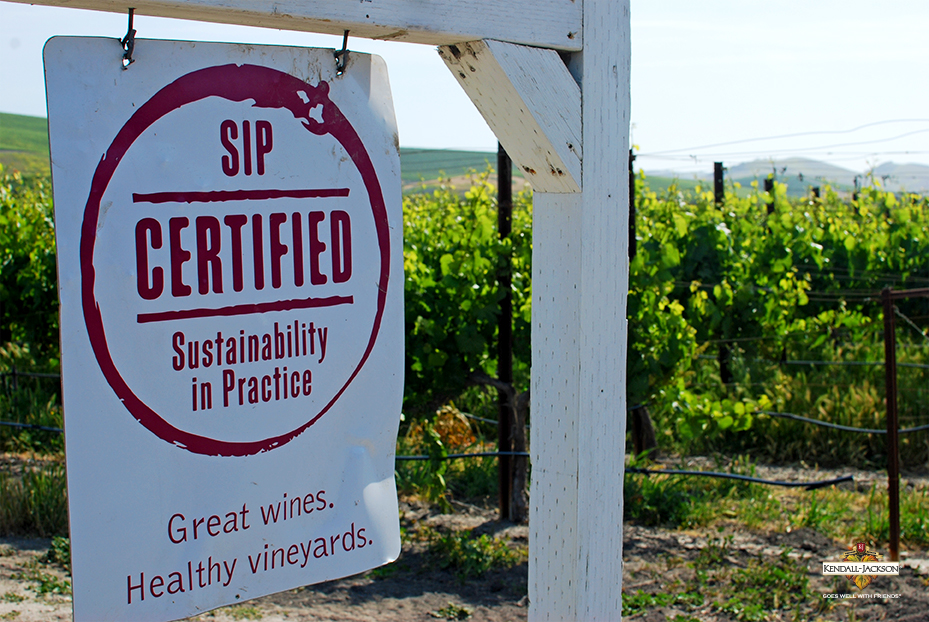 As we headed towards Neely Vineyard, which is mostly comprised of blocks of Syrah, Randy talked about how we wouldn’t believe the sand that these grapes were growing in. I couldn’t believe that anything, let alone grapes, could grow in sand. He explained they actually grow extremely well under those conditions and it actually gives the grower more control. Sure enough, there were some beautiful Syrah grapes growing in sand thanks again to the influence of the inland mountain ridge. Randy pointed out that the Syrah grapes are different, in that they’re more elongated and spread out than most other grapes — especially Chardonnay. 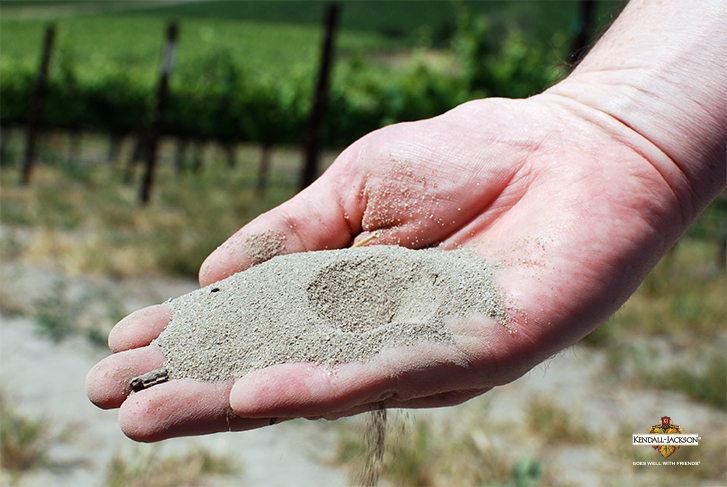 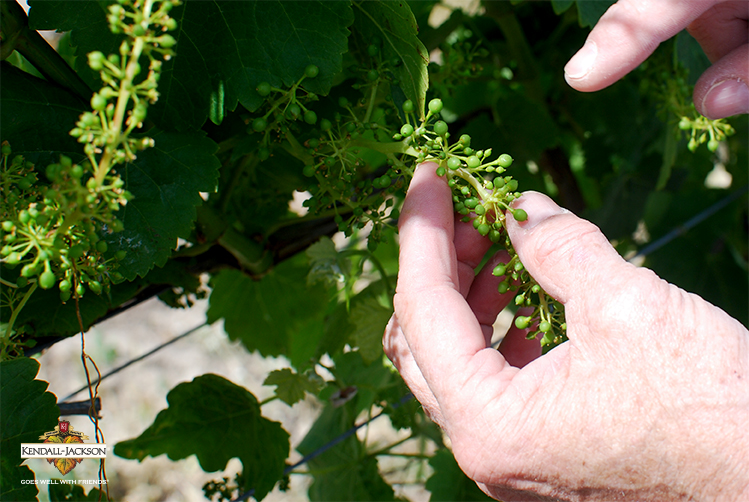 As we drove over to the Byron and Cambria Vineyards, Randy pointed out how steep the slopes of the mountains were. He said, “the best Pinot Noir comes from slopes, where the poorest soil is.” This stresses the grapes and really makes them “think” about what they’re doing and how they’re going to survive in those harsher conditions. 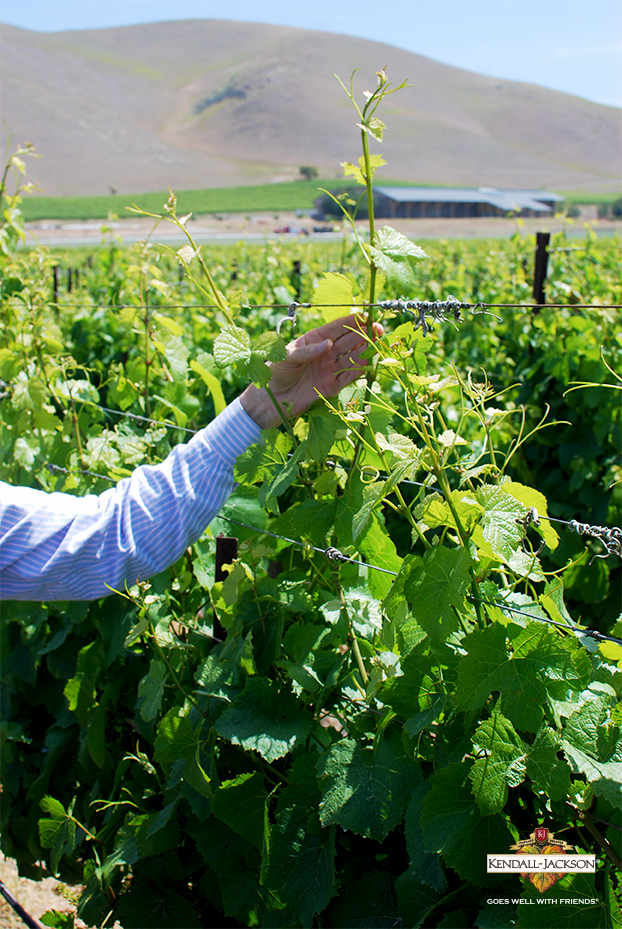 A lot of the vines at these vineyards were over 40 years old and still on their original root. I noticed immediately that these vines were much taller than the other grapes we’d seen before. Randy said they had been exposed to more heat, which causes the vines to focus more on growing, rather than the grapes themselves. We also noticed most of the grapes here were growing higher off of the ground. Randy called this “California Sprawl,” which he said was an “old-school” way of growing. 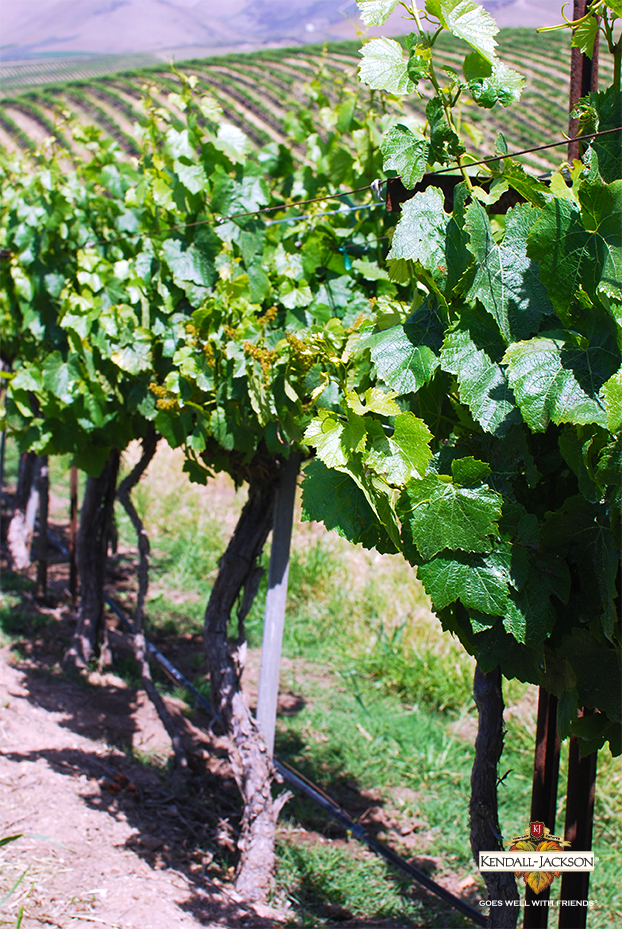 As we left Santa Barbara County and headed towards Monterey County, we talked all about grapes and the growing process. Randy told me that these trips allow for him to see the progress of the grapes and to compare each grape at each location. He noted that the grapes down south are almost always ahead of the grapes up north near Monterey and Sonoma. This is a good thing and is caused by the unique microclimates that the grapes live in.

Click here to see how the bloom looked in Monterey.