The Best Wine and Steak Pairings

What's the best wine with steak? For most, eating steak means eating well. First, steak is pricey, so there’s been a splurge. Second, steak is full of nutrients - protein, iron, phosphorous, zinc and five B-complex vitamins, so bodies actually benefit from the financial indulgence. Just like with wine, there are many variations to steaks, from different cuts to how the cows are fed. While that is incredibly cool, it can make decision-making hard. There is not only the slab of meat to choose but also the wine to accompany it. What is the best wine with steak? This post will help “steer” you in the right direction.

There are only three of eight USDA (US Department of Agriculture) grades of beef you would usually find in a restaurant or store: Prime, Choice and Select. Were you to consider this in a wine-like hierarchy à la France’s Burgundy, Prime would be Grand Cru, Choice would be Premier Cru and Select would be “village” wine.

Two factors count in dividing meat into these categories: the fat marbling and the age of the cow. The younger and fattier the cow, the better the meat. Fat gives flavor (as with so many foods we love) while youth gives tenderness. Choice and Select could be considered healthier, if less flavorful.

Grocery stores tend to carry Choice and Select steak cuts. Restaurants and premium retailers usually snatch up Prime pieces. This is one of the reasons that slab at your favorite steakhouse tastes different from the one you make at home. Fierceness of heat and “secret” seasonings also make a difference.

Best Wine with Steak Pairings – But, Which Cut of Steak?

There are four primary cuts that have led the charge for much of the course of steak history. A few others are the (relative) bargain cuts that are less the focus of steakhouse lust and make more regular appearances elsewhere.

Ah, filet! Folks wax rhapsodic over this cut of steak. Its texture is magnificently tender. However, for flavor hounds, this priority can be confusing as filet is the least fatty and least flavorful bit of the cow. Ever notice how a sauce almost always accompanies filet mignon? Moreover, it is also the most expensive.

Nonetheless, because of its delicate flavor, if served with no accompaniments, a lighter style of Pinot Noir is ideal. The Kendall-Jackson Vintner’s Reserve and the Grand Reserve Pinot Noir have a pure fruit focus with little toasty oak influence so that the wine doesn’t compete with the meat’s finessed flavor.

If the filet is accompanied by a sauce or festooned with peppercorns, it can take a heartier, more concentrated Pinot Noir that might have a touch more smokiness from its barrel aging. The K-J Jackson Estate Anderson Valley, Outland Ridge and Secco Highlands Pinot Noirs would be better companions in this case. Their thicker palate feel (think whole milk versus skim) and more concentrated flavors in these bottlings can more easily take on sauces and generous seasoning.

The best wine with steak is a complicated topic, so let's take a look at more top cuts. 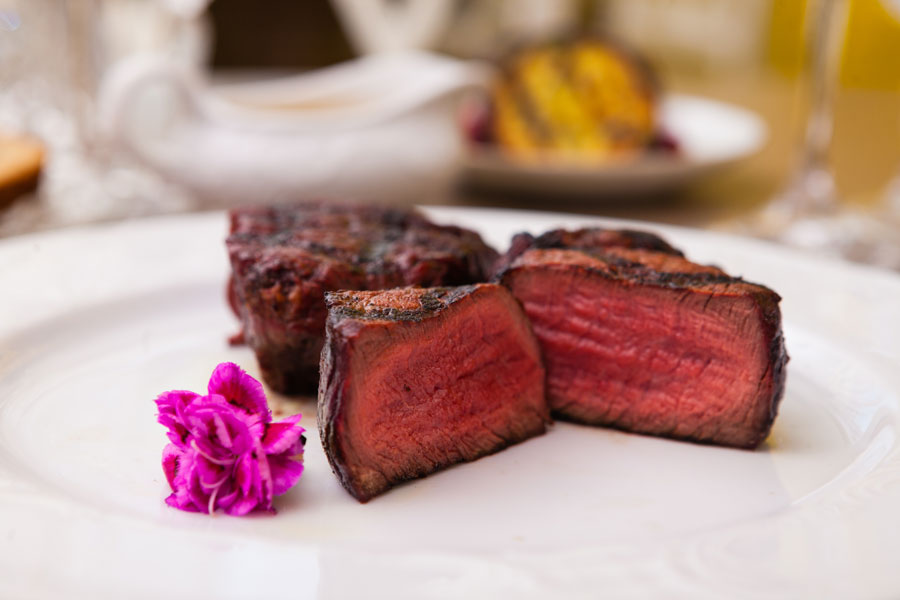 The New York Strip ratchets up the fat content. It’s packed with flavor and sheer meatiness. This tends to be served naked, save salt and pepper. It needs little embellishment.

Yet strip steak isn’t a one-pan wonder. All of that flavor can dress up more than potatoes and creamed spinach. Take away the cream and taters, add some multi-grain croutons and cherry tomatoes and you’re pretty close to a Steak Salad, like this one with Honey Dijon Dressing. Cabernet Sauvignon isn’t the call to make here with all the garden fresh veggies in play. Opt instead for lighter Pinot Noir or consider a Rosé with some spicy kick, like the K-J Grand Reserve Rosé blended from Syrah, Grenache and Pinot Noir. 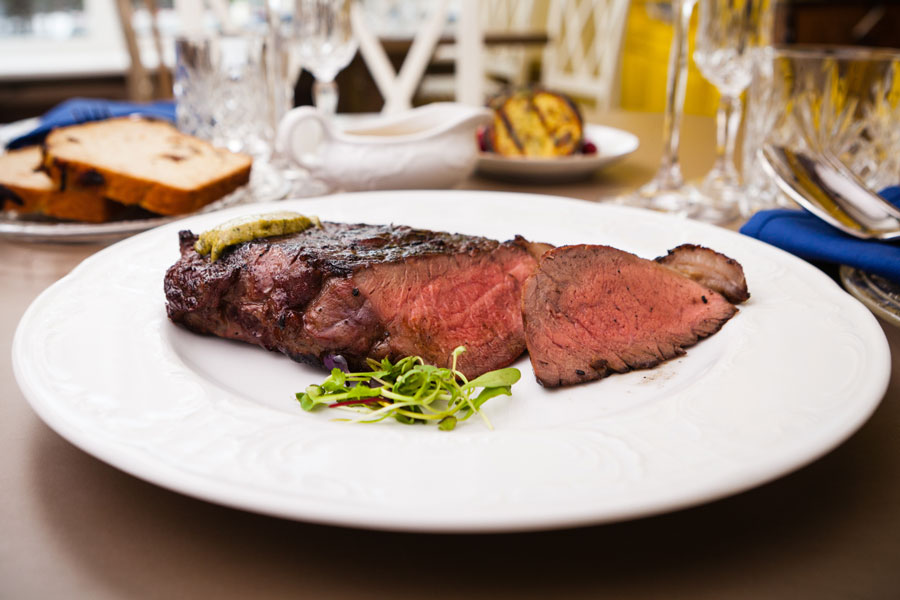 The most dynamic flavor fireworks in the steak family come from the rib-eye. It’s not as tender as the other cuts you find in a steakhouse, but that just means you enjoy the flavor more as you chew a little longer. That’s a fair trade.

This steak variation calls for a spicy Zinfandel. Zins, as they are affectionately known, are explosive with a diverse array of forest fruit ripeness that nicely contrasts the meatiness of the rib-eye. While some entry-level versions can be a bit heavy on the palate, well-balanced versions like the Kendall-Jackson Vintner’s Reserve Mendocino County bottling have the acidic vivacity to stand-up to the marbling of this chunkier cut. 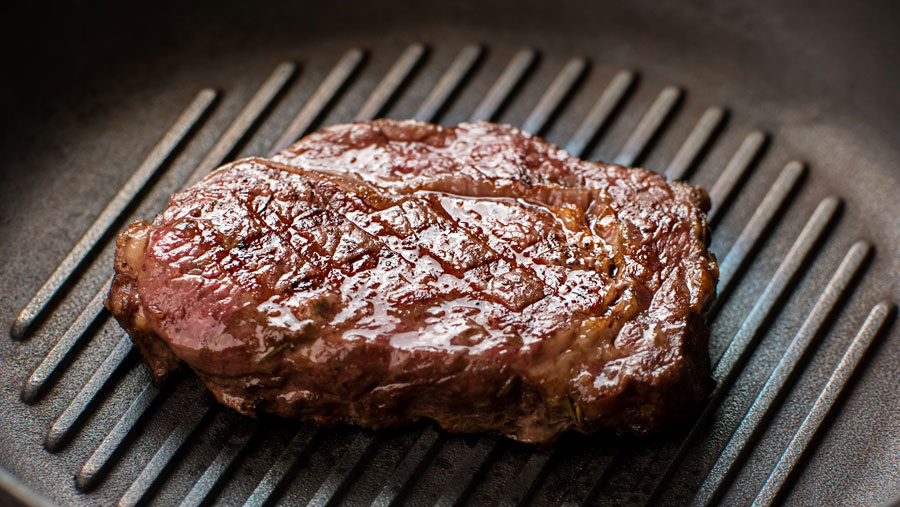 The Porterhouse is the heavyweight of these cuts, containing both strip and tenderloin. A Porterhouse has more of the tenderloin than the T-Bone, also a colossal slab to undertake but slightly less daunting.

The combination of these two cuts calls for a more refined red that can handle them both - something not as light as a Pinot Noir and not as heavy as a Cabernet Sauvignon. Syrah provides the perfect solution, offering tannins more finessed and along the lines of Pinot Noir as well as plenty of hearty black fruits more akin to Cabernet Sauvignon. If the weather is warmer or you’re more in the mood for a medium-body wine, reach for the K-J Vintner’s Reserve Syrah. If it’s chilly outside or you’re craving a full-throttle wine, turn instead to the Jackson Estate Alisos Hills Syrah. 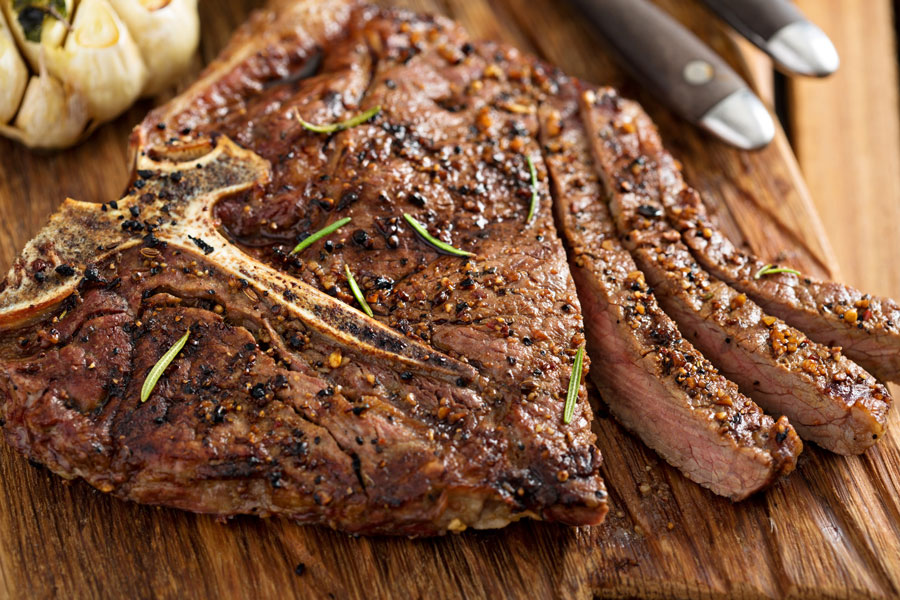 This duo might sound provocative if we weren’t talking about steak! That aside, these two cuts share a unique appeal: they’re less expensive than the cuts mentioned above. Skirt tends to be chewy and so takes well to tenderizer and marinades. It’s also rather fatty. Flank comes off the belly, isn’t as fatty and works well with a sauce or compound butter. For skirt and flank steak, the wine pairing depends more on the final dish rather than simply the cut.

This Skirt Steak with Chimichurri Sauce allows for more adventurous pairing possibilities. That is because of the green elements of the parsley and cilantro, which tend to clash with red wine flavors, particularly in riper wine styles. However, wines from cooler areas, like the mountains of Alexander Valley (Cabernet Sauvignon - Hawkeye Mountain) and Napa (Cabernet Sauvignon - Napa Mountain) Valley, tend to show cooler notes of high tones of evergreen and eucalyptus that can work well with this dish. Additionally, for a lighter option that’s more offbeat and that works particularly well at lunch or on a warm summer evening, check out the K-J Vintner’s Reserve Sauvignon Blanc. As a parent to Cabernet Sauvignon, Sauvignon Blanc shares the same notes of eucalyptus and also boasts green bell pepper. Richer styles, like the K-J Grand Reserve Sauvignon Blanc, also have the bandwidth to match the steak’s depth of flavor while sporting plenty of acidity to cleanse the palate from the meat’s fat.

So, what’s the best wine with steak? It primarily depends on the cut of meat and its preparation, but it can also depend on the steak’s accompaniments. What’s for certain is that steak is better with wine – any wine! 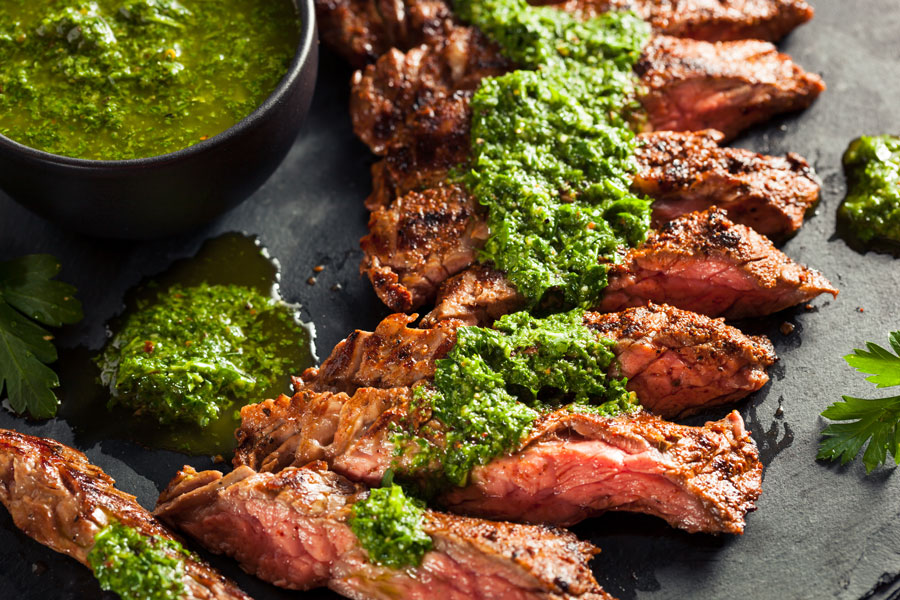 For more food and wine pairing tips, visit the Entertaining section of our website.