Recently at the wine industry’s big annual conference, Unified Wine and Grape Symposium, there was an exciting panel discussion about Biodynamics. For some reason emotions run high when wine people discuss this topic, which explains the description of the session “Biodynamics: Point/Counterpoint… This session will strive for a balanced conversation and provide diverse viewpoints regarding the effects of this controversial agricultural philosophy.”

As we settled into our seats it felt like fight night at Caesar’s Palace. The crowd was buzzing with anticipation of a no holds barred battle. Strange, right? We’re just talking about different farming approaches, or are we? If fact,  Biodynamics draws a lot of attention because of its application of cosmic forces in farming.

At the heart of the subject is: what do Biodynamic, organic and sustainable farming programs stand for? Each has unique characteristics and there are areas of broad overlap and areas where there is none. Here’s the breakdown in brief: 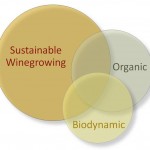 Organic programs do have absolute requirements (like no synthetic pesticide use, etc.) mostly based around food safety. That being said, organic farming doesn’t take into account any of the factors associated to social and economic aspects or consider factors like as energy and water conservation.

Biodynamics is very similar to organic farming, but with the addition of some unique approaches to increasing vineyard vitality. This method requires planning farming activity around lunar cycles and the use of preparations to “enrich and balance the farm organism by uniting cosmic and terrestrial forces.” (Check out this Biodynamics preparations chart. It’s what pushes people one way or another.) The system is based on lectures given by Rudolf Steiner in 1924. He proposed investigation of spiritual phenomena through clairvoyant experience and attempted to find a synthesis between science and mysticism.

Are you starting to see where the controversy comes from?

The Debate At The Unified Wine And Grape Symposium

The panel discussion began with Ginny Lambrix, of Truett Hurst Winery, and Ivo Jeramaz, of Grgich Hills, giving personal observations of Biodynamic farming impacts. They had plenty of anecdotal evidence of the benefits of Biodynamics on soil and vineyard health. Ginny ripped the Industrial Agriculture Complex over the negative effects from soil erosion, river pollution and ecosystem damage from the use of petro-chemicals on the food we eat.

Stuart Smith was next and the crowd collectively held their breath. Stuart’s been farming sustainably for 40 years in Napa and has a blog called Biodynamics is a Hoax, and he explained why he’s gotten himself in the middle of this.

Firstly, Biodynamic farmers are saying their vineyards are healthier and their wines are better than everyone else’s, but there’s no scientific evidence to back it up.

Secondly, according to Stuart,  Rudolf Steiner had no farming experience, was a complete nutcase and charlatan whose works should be cataloged under “science fiction.” No mincing words here, but to be fair, Biodynamic proponents (and panelists) agree: Steiner’s work is out there. Steiner gave almost 2,000 lectures and wrote 50 books on subjects including education, social activism, architecture and visual arts, performing arts, medicine and religion.

After the Q&A between us and the panelists, I think the issues of contention can be summed up this way:

Science: There is no real scientific evidence for efficacy for Biodynamic practices over sustainability practices, but proponents don’t care. They like the system, feel that’s effective and don’t really care so much that it came from Steiner.

Preparations: Proponents feel preparations work but don’t know how, and they’re OK with that.  Opponents feel the preparations are akin to witchcraft and if left out that Biodynamics is pretty much like organic farming.

Sustainability Continuum: Opponents feel it’s unfair for proponents to frame the argument as Biodynamic vs. Industrial Agriculture. Plenty of sustainable farmers have the same cultural practices Biodynamic promotes without the preparations.

At the end of the day, Biodynamic proponents and opponents agreed that neither cares so much what the other thinks and each is confident and happy with their own position.

So which side do you fall on?