Several years ago, chef Andrei invited my wife and me to his parent’s home to celebrate Butter Week.  With a name like Butter Week, I figured it had to be good.  We enjoyed buttery blinis the size of pancakes served with homemade caviar, smoked salmon, sour cream, melted butter and homemade jam.  The meal was like an all-you-can-eat caviar & blini buffet with Andrei’s mom serving fresh, steaming, delicious blinis every few minutes.

I think I ate more caviar in that one evening than I had eaten in my entire life.  There was no shortage of vodka at the festivities, but I stuck with the Kendall-Jackson Chardonnay, which made a wonderful pairing with the blinis.  It is always a great honor to be invited into a friend’s home and take part in their culinary traditions.

I have asked Andrei’s mother to supply us with her amazing blini recipe – this recipe is the real deal and has been passed down for generations in their family.  If you plan on eating caviar, you should definitely take the time to make this recipe.  They are also great to make in silver dollar sized shapes and use as passed hors d’oeuvres.  Whenever I make these blinis for my wife, I refrigerate the batter overnight and make the world’s best pancakes for breakfast the next day.   – Justin

Blini (pronounced blee-nee) are Russian pancakes served during Maslenitsa, or Butter Week. This spring festival marks the end of winter and the beginning of the Great Easter Lent. Traditionally, blini are yeast raised and made with buckwheat flour. They are served with caviar, melted butter, sour cream, smoked salmon, minced onion, chopped egg and, of course, a shot or two of vodka. There are as many recipes for blini as there are Russian babushkas. This recipe was given to me by my mother who in turn learned it from her mother. One of the secrets to a light and fluffy blin (singular) is to not stir the batter once it has rested properly; and to use the carefully skimmed foam off of the top of the batter to make the blini. 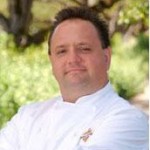 Chef Andrei Litvinenko is a graduate of the California Culinary Academy. He was born and raised in San Francisco in a Russian immigrant family. He grew up working in the family restaurant where he learned to appreciate eastern European cuisine,and grew to love cooking.