Hold a stalk of Swiss chard and slide your other hand along the stalk, stripping away the leaf. Repeat with all of the leaves. Trim away the bottom of the stalks and cut the stalks into 1⁄2” thick slices. Cut the leaves into 1” pieces. Set aside.

In a skillet just large enough to hold all the chicken pieces in a single layer, fry the bacon over medium-low heat, stirring occasionally, until crisp, about 7 minutes. Using a slotted spoon, transfer to paper towels to drain. Increase the heat under the skillet to medium-high.

Season the chicken liberally with salt and pepper and add to the skillet, skin side down. Cook until browned, about 4 minutes on each side. Using tongs, transfer to a plate.

Add the Swiss chard stalks to the skillet and cook until softened, about 3 minutes. Using a slotted spoon, transfer to a plate. Add the carrot, celery, half of the shallot, and the thyme sprigs to the skillet. Cook until the vegetables are softened, about 5 minutes. Add the wine and cook until nearly dry, about 5 minutes. Add the stock and bring to a boil. Add the chicken, skin side up. Cover with a lid slightly askew and reduce the heat to medium. Cook until the chicken is opaque throughout, about 20 minutes. Using a slotted metal spatula, transfer the chicken to a plate. 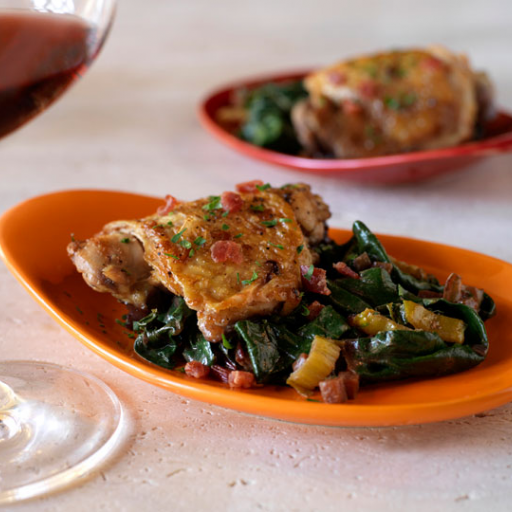