What Does California’s Extreme Season of Snow and Rain Mean for the 2017 Vintage?

California has ached for water for six years. With a “La Niña” (a Pacific Ocean-generated weather pattern that prevents precipitation from dropping on California) forecast for the start of 2017, farmers braced for another round of “same song, seventh verse” of dryness. Surprisingly, it has turned out to be an extreme season of snow and rain posing an about-face for the vine: drought versus deluge.

Yet, only two months into the year and 62% of the state is now drought-free (including all of the North Coast that encompasses the Kendall-Jackson vineyards in Sonoma, Anderson Valley and Mendocino), according to the United States Drought Monitor. It’s as though someone flipped a light switch and the deluge of precipitation began. Areas under extreme drought conditions fell from 41% to 2% from January to February, according to the Pacific Institute’s CaliforniaDrought.org. 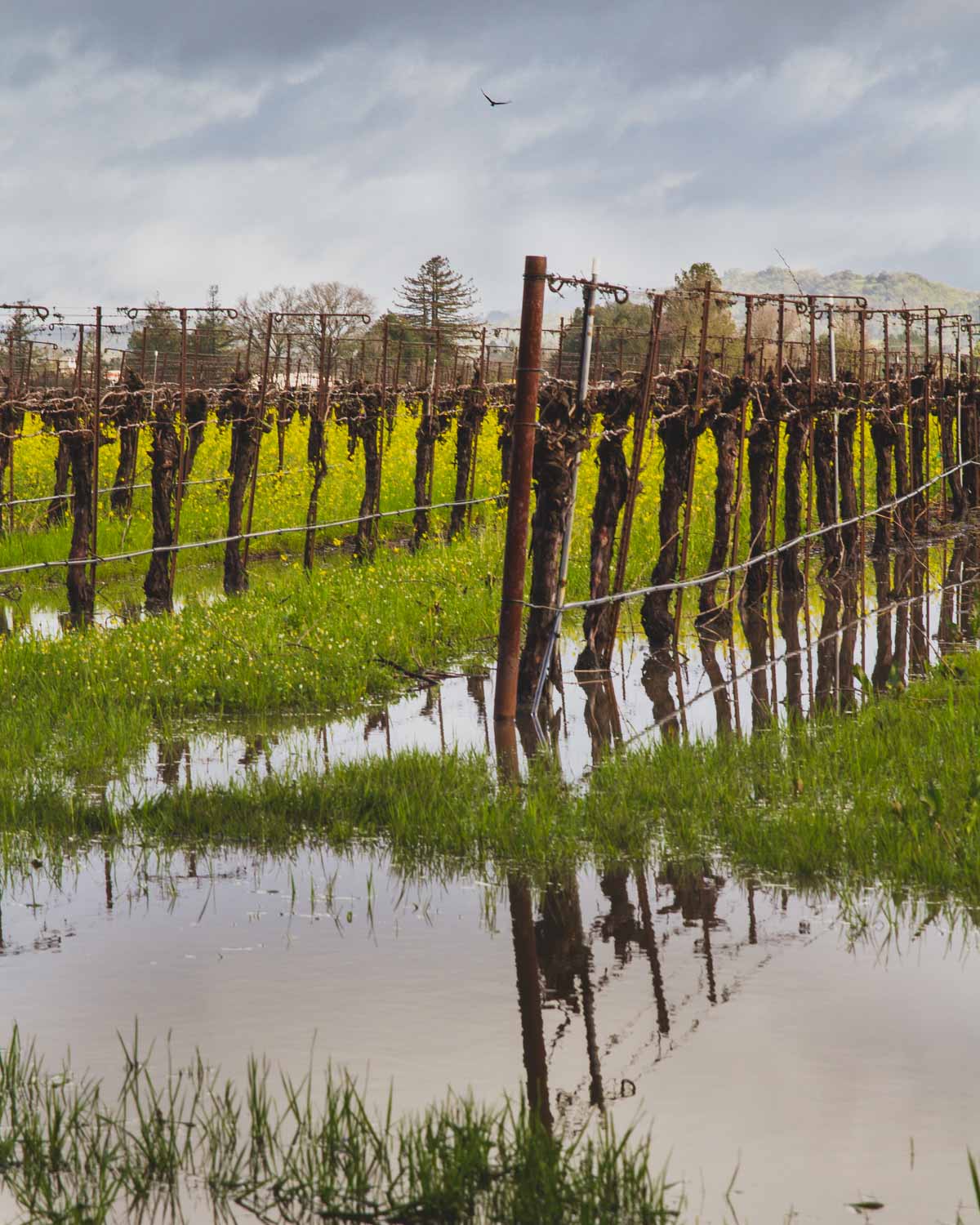 While not having a vineyard parched dry seems good, what do extremely wet conditions do to grape vines? Kendall-Jackson Vineyard Manager Brian Malone reports that Sonoma County is 225% above normal precipitation so far in 2017.

Even if you don’t have a green thumb, you know a garden plot needs water, and it needs that water at various – and fairly specific – times of the year. All the same applies to grape vines, except that grape vines legendarily “need to struggle” to produce excellent wines.

As such, grape vines tend to be planted where they should receive just enough water. Now that many of the reservoirs are overflowing – and some in the K-J family are even using their spillways — it begs the question: What Does California’s Extreme Season of Snow and Rain Mean for the 2017 Vintage?

Malone and Randy Ullom, K-J’s Winemaster, have high expectations. Ullom said, “In winter, there is never too much moisture unless there’s so much that we can’t get into the vineyard and prune.” Here’s what they expect this coming spring, assuming there are no other dramatic weather events.

This brings us to grooming the vines before their winter dormant stage finishes. Vineyard access in wet conditions is a multi-pronged issue: 1) the vineyards could be too muddy to support a tractor or even vineyard workers. 2) the vineyard workers are subject to slips and slides as well as colds and other sicknesses arising from working in chilly conditions. Moreover, Malone adds that erosion could be an issue for steeper vineyards, if they are not composed of well-drained soils.

Once the pros take care of the pruning work, 2017 could shape up to be a fine vintage in many respects. One of the primary results of the massive quantities of precipitation will be a mega-dose of nutrients. Additionally, as water conducts heat, there should be a hastening of grape vine growth, once the vines get started.

It has been a significantly cold year, so the vines have enjoyed a good rest. They should be raring to go once they “wake up” from their hibernation. If it’s a cool and rainy spring, it will take longer for them to do so. Vines can be remarkably like humans. We’re much more excited to hop out of bed on a sunny, warm day!

So, everyone in the wine world has all digits crossed for a warm, dry spring and summer. Either way, the vines will certainly be ready to produce green vegetation this year thanks to the readily available water and nutrients. All of the water also has the effect of rinsing away the salts in the root zone, further improving the vines’ access to nourishment.

This means field teams will be kept busy making sure to find the right balance between the green growth and the buds that produce fruit and seeds. When vines are “comfortable” they’ll put out more leaves and shoots rather than focusing on their “survival” by producing more grapes and seeds to propagate.

Throughout the season, Ullom and Malone will be relying heavily on three- to five-day forecasts rather than counting on season-range predictions. Weather has been so variable in recent years that it’s impossible to work on long-term averages.

In sum, the K-J team is highly optimistic for the quality of the 2017 vintage at the outset of the season. They’ll be plenty busy, just like the grape vines. Because whatever the conditions, fine-tuned teams know well how to handle any season, from drought to deluge.