Here's How to Pair Wine with Paella

A Short History of Paella

Paella is a Spanish dish. Literally a dish. “Paella” or “La Paella” refers to the pan in which this rice-based meal is composed and cooked. The name likely stems from Latin words beginning with “pa”, which means to drink. Derivatives beginning with “pa-“ are typically used for vessels with culinary uses. The Latin word patella was a flat tray used to make offerings to the gods.

Two other theories on the word paella are also interesting, if less likely to be correct. One is that paella stems from tradition of men making paella. This continues to be typical today; it’s a bit like men tending to do the grilling here in the USA! A Spaniard would make a rice dish para ella, or “for her”. The story goes that men used to make paella on Sundays while their women were at church. 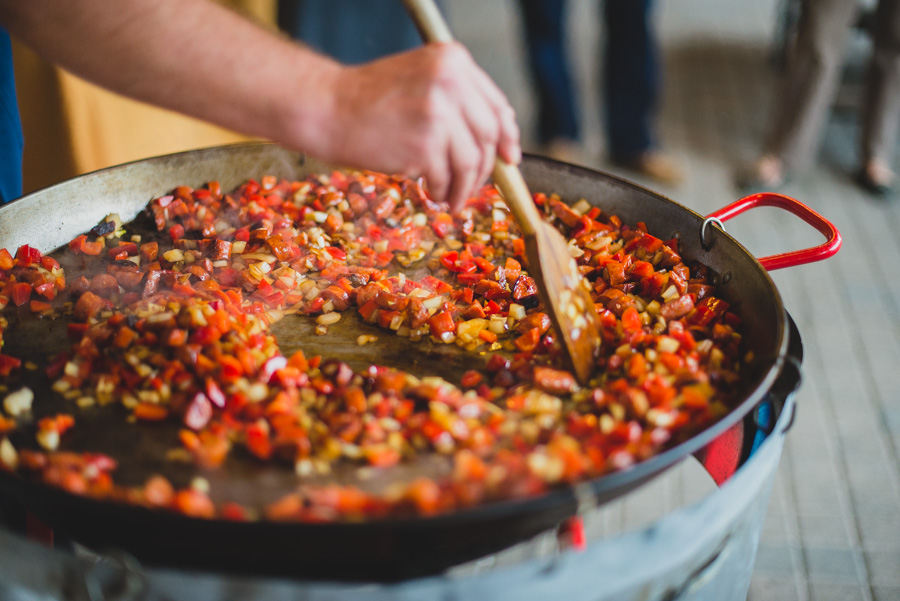 Another theory is that paella is a corruption of the Arabic word baqiyah, which means leftovers. This theory states that servants during the reign of the Moors used to mix the leftovers from royal banquets with rice for their own meals.

Regardless the origin of the name, we do know that Valencia is the undisputed home of paella and that the dish had humble origins as a dish for farm laborers. Hence, it is feasible that paella stems from the word baquiyah. This is given further credibility by the fact that the Moors introduced rice to Spain during their reign. Valencia was a particularly good place to grow rice because the Romans had introduced irrigation there, and rice – along with almonds, pistachios and alfalfa - has one of the largest water requirements of all crops.

However, it seems the Moors waited to introduce arroz, the Spanish word for rice, which is derived from Andalusian Arabic arráwz, for several centuries. Some historians believe the short-grained rice that is the base of paella wasn’t introduced until the 1200s in the lagoon outside Valencia that is called Albufera. Nonethless, by the time the Catholics banned the Moriscos from Andalus, the Arabic name for Spain, in 1609, paella was a well-established Valencian specialty.

Just as pairing the right wine with paella is important, so is having a proper paella pan. Paella pans are traditionally round and squat. The purpose of the short, flared-edge pans is to promote the contact of the rice with the pan. The Spanish say that the rice shouldn’t be thicker – or higher – in the pan than the width of a finger. This combined with the high heat under the paella pan promotes the much-desired crispy texture and caramelized flavors for the rice. That crust on the bottom of the pan is called socarrat, which means “lightly crusted” in the Catalan dialect. There is, however, some room for a touch of liquid in the pan, and those tiny divets in the bottom of it help to keep just enough moisture in the bottom of the paella.

How big should a paella pan be? It depends on how many hungry tummies you’re feeding and/or how many days of leftovers you’d like. Just like leftover soups and pastas, a paella tends to improve in flavor as its ingredients marinate together in the refrigerator. There are paella pans for individual servings as well as those massive ones you may see at a Kendall-Jackson event that you have to walk around to stir!

What Wines Pair with Different Versions of Paella?

The primary and traditional ingredients for Paella Valenciana include chicken, rabbit and escargot along with white beans, green beans, red piquillo peppers and artichokes. And, of course, the rice is liberally doused with saffron, the Moors preferred seasoning for rice. Surprisingly, since Valencia is a seaside town, no seafood is included in a traditional Paella Valenciana.

Paella Valenciana’s turf foods focus makes it the best one for a red wine and paella pairing. (Yes, those artichokes can be tricky with any color of wine, but they are such a small part of this hearty mix that they hardly pose a serious wine pairing faux pas.) However, there absolutely are certain red wines to avoid with Paella Valenciana. Those are red wines with lots of new oak. The best red wines for Paella Valenciana are unoaked or have little noticeable new oak influence. When red wines are aged in new oak, they tend to offer flavors of mocha, cola, sweet cream and even incense. Try imagining adding any of those to your paella dish. It sounds pretty unattractive, right? My favorite line-up of red wines with Paella Valenciana are those from the Vintner’s Reserve series. Two excellent red wine options with plush tannins to match the creamy texture of the rice are the Vintner’s Reserve Pinot Noir (the more medium-bodied of the two options) and the Vintner’s Reserve Merlot (the fuller-bodied option). 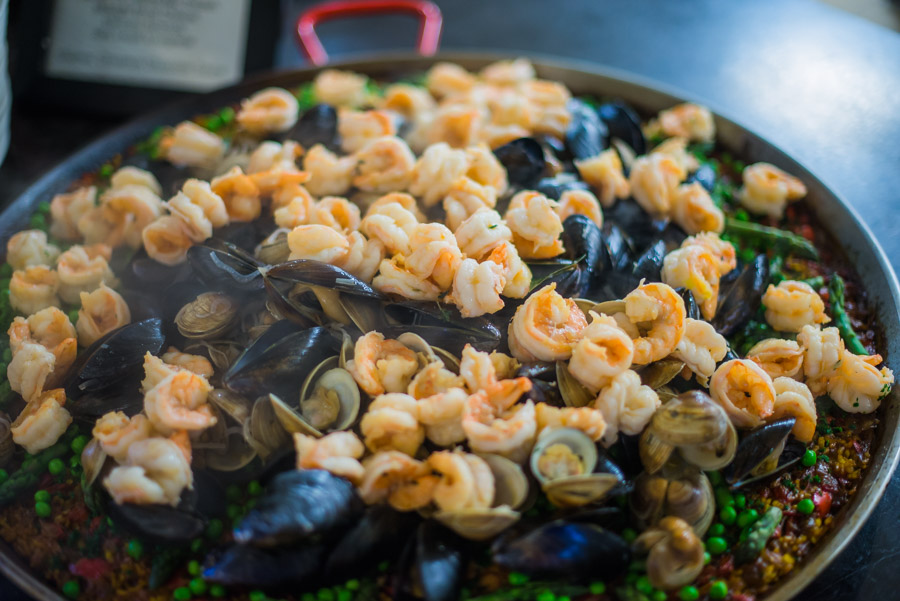 Seafood Paella is self-evident. It’s one of the prettiest paellas too, with its decadent displays of the bounty of the sea: lobster tails and jumbo shrimp (both usually with shells still on), mussels, squid tentacles and more.

For Seafood wine pairings with paella, skip red wine entirely. Fish and shellfish tend to react poorly with the tannins of red wines, creating an unpleasant, even shrill, metallic taste. Instead, opt for rosé! Rosé is the perfect in-between (white and red, that is) wine and stylistically works particularly well with seafood dish that is rich in flavor. You get the more abundant freshness of a wine that acts like a white along with the more generous fruit flavors of a wine that might have otherwise been made into a red. I particularly love the Grand Reserve Rosé with Seafood Paella for its deeper flavors and more intense color. However, if you like a more gentle rosé style, the Vintner’s Reserve Rosé works equally well with Seafood Paella. 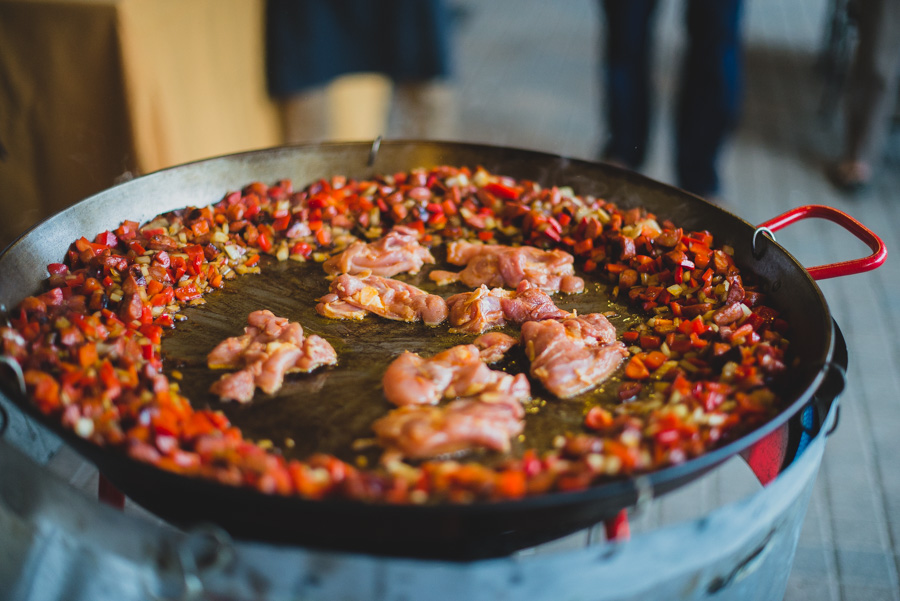 Paella Mixta combines surf and turf in the paella pan. It was created by an English chef in the USA. Paella Mixta is often called Paella Valenciana, but we know from above that a “mixed” paella isn’t true to the original version from Spain’s eastern shoreline. In fact, Mixed Paella comes from England! Apparently, a post-World War II cookbook writer created this version of paella by combining shrimp and chicken. Paella Mixta meshes best with white wines. Chardonnay is one of the more perfect white wine pairings with this paella as its rounded and silky texture blends seamlessly with the rice. The Vintner’s Reserve Chardonnay, the Grand Reserve Chardonnay Santa Barbara and Monterey and the Jackson Estate Santa Maria Valley Chardonnay are top combos. And, interestingly, whereas new oak flavors in red wines tend to clash with paella, those new oak flavors in white wines tend to blend more harmoniously with paella, especially with the crusty, caramelized, bottom-of-the-pan socarrat.

Paella Negra is made by adding black squid ink to the cooking broth. Its accompaniments include the squid (naturally!), tomatoes or tomato paste and red and green peppers. The squid ink component in this dish makes it very, very saline and savory. Following on my advice on seafood paella, it’s safest to stick with white wines here, too. I like the Vintner’s Reserve Pinot Gris as well as the Grand Reserve White Meritage, which is a Bordeaux-style blend of Sauvignon Blanc and Semillon. Both are plentifully mineral and have just enough of a palate-grabbing texture to mimic that of the paella. Finally, the wines’ acidic verve gives this rather full-on and unctuous dish the lift it needs to keep forking in the goodness.

Ready to throw a paella party now that you know how to pair the right wine with paella? Here are a few tips on entertaining with this gathering-friendly dish.

Christy Canterbury is a Master of Wine, journalist, speaker and judge based in New York City. In 2014, she was short-listed for the Roederer Online Wine Communicator of the Year Award. Her work has been published in Decanter, Wine Enthusiast, Edible Green Mountains, Wine Searcher, Food Arts, Snooth, Beverage Media, TimAtkin.com, Civiltà del Bere, Wine Business Monthly, TASTED, Selectus Wines and in other outlets.​