In The Vineyard: Pruning In Depth

Pruning is deep. When we prune a vine, we are influencing not just this year’s crop, but next year’s as well. No pressure.

One of our main jobs is to remove last year’s woody (lignified) growth on the grape vine to both stimulate new growth and fruitfulness, but also for controlling yield and timing of growth. Without human intervention, the vine would produce expansive vegetative growth and an abundance of extremely small clusters of fruit. Have you ever noticed a wild vine growing along the side of the highway? It would be extremely hard to supply a modern winery with vines like that.

OK, so we prune to control vine growth and its output. Now we need to decide what system of pruning we will use. This decision is planned from the moment we conceive of the new vineyard. We can make small adjustments, but when a vineyard is developed the pruning system is largely predetermined.

The most common system of vine training (trellising) is undoubtedly the Vertical Shoot Position, or VSP system. This system of trellis is the most suited to mechanization and ease of tractor use.

The two most common styles of canopy (the green parts of the vine – shoots and leaves) management that lend themselves to VSP trellising are cordon pruned and cane pruned. There are different ways of trellising the vines while incorporating these two pruning styles. These differences are in the number of cordons or canes that are trained for fruit production. There can be one cane or cordon only, or up to four or more on more elaborate systems.

Note the thick woody extensions in either direction away from the trunk (the cordons). This is a bilateral cordon-trained spur pruned vine in a VSP system. (See the picture below.) 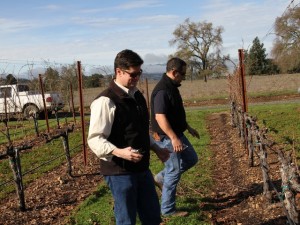 Note the thin canes derived from the trunk that are attached to the wire just above the head of the trunk (fruiting wire). This is a head-trained cane pruned (or double Guyot) vine in a VSP system. (See the picture below).

One other system of pruning that is common in California is the head-trained spur pruned one. Here, there is no elaborate network of stakes and wires to support the vine and its growth. The vine is allowed to flop like an umbrella about the trunk. The fruit hangs underneath the shade of this umbrella.

Many of the old-vine Zinfandel vineyards are trained and pruned in this system. Newer plantings are rarely done to this style as it does not lend itself to mechanization and will always require hand labor for all operations.

As we talked about last week, pruning is all about balance. We choose the style of trellis and pruning method that best suits the individual site. Among the things we take into account are both the vigor of the variety and rootstock combination, and the soil type. We might choose a spur-pruned cordon system where there is sufficient vigor and fruitfulness. Cane-pruning might be employed especially in cooler climates where vigor is limited, and fruitfulness of the basal buds on the cane is questionable.

This is an interesting phenomenon in the grape world. There are certain varieties of grape, such as Thompson Seedless and Nebbiolo, that do not produce clusters on the shoots derived from the lower two buds (basal buds) on last year’s growth (cane). So if one were to prune leaving only those two buds for new growth, the vine would bear no fruit. Other varieties are somewhat affected by this syndrome. In those cases, fruitfulness and yield can be increased by employing a cane-pruning system where buds far beyond the basal buds are left to produce new growth.

Kendall-Jackson and the Kentucky Derby

Cooking Class: How to Cook Crab