Poached Shrimp
Place the shrimp in a large metal mixing bowl and set aside.

In a medium sauce pan, bring the water, wine, garlic, onion, ginger, lemon, sachet and salt to a boil.  Once the mixture comes to a boil, turn down the heat and allow the broth to simmer for 10 minutes.  Bring the mixture back to a boil and strain directly onto the clean shrimp.  Leave the shrimp to cook for 3 to 5 minutes, until completely opaque.  Add two large scoops of ice to the bowl, allowing the shrimp to cool completely in the cooking liquid before removing and refrigerating for further use.

Sachet
You will need 2 sachets, one for poaching the shrimp and one for the pickled watermelon rind.  Divide each of the ingredients equally among two small bowls and mix.  Wrap contents of each bowl in separate pieces of cheesecloth and tie with kitchen twine.

Pickled Watermelon Rind
Peel the outer green layer of the watermelon rind and all red/pink flesh, leaving only the white rind. Cut into small 1 to 2-inch pieces and set aside.

In a medium bowl, or 1-quart deli container, mix the salt and water until the salt dissolves.  Add the watermelon rind and refrigerate for 24 hours.

The Following Day
In a medium sauce pan, heat the vinegar and sugar until the sugar dissolves.  Add the sachet and bring the whole mixture to a boil.  Meanwhile, drain and rinse the watermelon and add to the boiling vinegar.  Lower the heat and cook for 35 to 40 minutes until translucent.  Once cooked, chill the whole mixture together.

Assemble
To assemble place shrimp on fork add a small dollop of crème fraîche and place fresh and pickled watermelon on top.  Sprinkle with sumac and garnish with chervil. 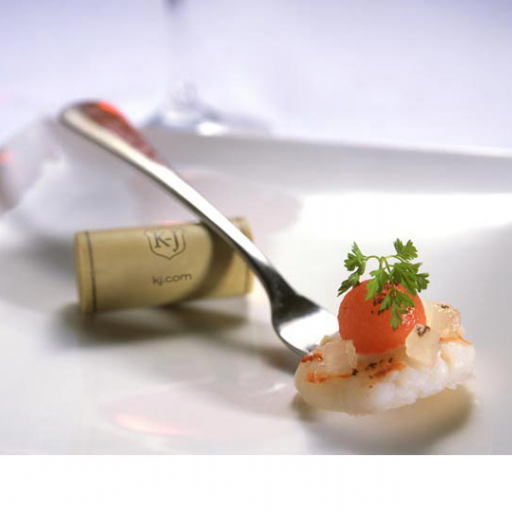