In The Vineyard: Suckering

This week I’m back in the vineyard starting to do “suckering.” Regardless of how it sounds, suckering is an important part of the vine – and future wine’s – development.

The new shoots have been growing really well over the past month. And now is a good time to go in and remove any unwanted growth that has emerged on the vine. This process is called suckering.

When we pruned the vine in the winter, we left a certain number of buds on the vine that we intended to grow and produce clusters of grapes. The vine is a pretty complex organism, however, and given successful growing conditions with ample water and nutrient-rich soil, it may produce many more shoots than we thought we were leaving.

These shoots can emerge from buds that were hidden beneath the bark. Other shoots push from the secondary buds within the main bud. Grapevine buds are not singular, but rather compound buds that contain a primary and two secondary buds. This is an evolutionary adaptation to weather and pest conditions. If the primary bud is damaged (or the shoot is destroyed by frost), one or both of the secondary buds will emerge to make sure that the vine lives on to produce more seeds. 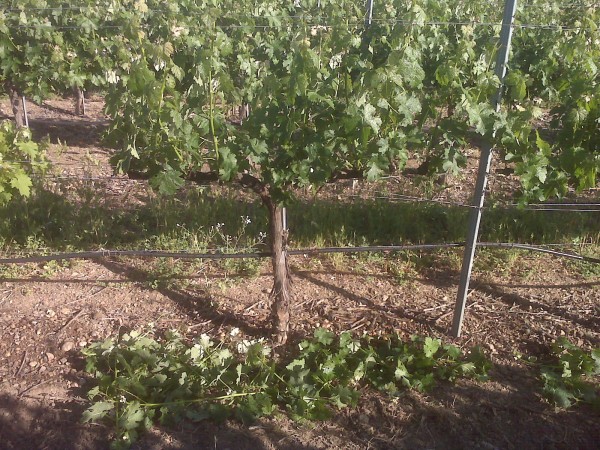 Sometimes the secondary buds push anyway. This is called “doubles” or “triples,” which refers to two or three shoots emerging from the same bud location on the spur or cane. We send crews through at this time to knock off all the extra growth we don’t want that is weighing on the plant’s energy.

Every growing part of the plant is an energy sink, which means extra shoots or buds will take energy away from the business of growing and ripening the crop that we intended to develop. If you remember my discussion on pruning, we already set the number of buds that we leave on the plants in accordance with the potential of the site and the training system.

In some cases we may leave extra buds on a vine in order to reduce the energy the plant has for the intended crop. This is a good strategy where a site has ample access to water and very rich, deep soils. Then, once the shoots slow and are about to stop growing, we remove these extra shoots and allow the rest of the crop to mature. This practice is called leaving a “kicker cane.”

Right now is prime time to get into the vineyards and remove this unwanted growth. The shoots haven’t formed their fixed attachment to the vine yet, which means they pop off with just a little bit of pressure. You have to be careful, though, because you can accidentally knock off shoots that you would really like to keep. But if we wait much longer, it won’t be easy to remove them, and breaking out pruning shears again adds time and cost.

The picture at the top of this blog post is a Cabernet vine on one of our Geyserville ranches. That vine has not been suckered. The picture in the middle of the post shows the vine after I’ve suckered it (the shoots I’ve removed are on the ground in front of the vine). Cheers!