Duck Confit: Does It Get Better With Time?

Not too long ago our resident curd nerd, Tracey Shepos Cenami, stumped some other chefs and I when she told us that duck confit should be aged before it was eaten. I wasn’t so sure, but she threw down the gauntlet and we tested her theory. Check out what she’s got to say about the experience. -Justin.

It’s really unusual when I can stump a kitchen full of experienced culinary minds. I was preparing a batch of duck legs to confit, casually stating that it should sit for at least 4 weeks after being cooked to develop flavor. My boss quizzically raised his eyebrows and posed the idea to the other chefs in the kitchen. They, too, had never heard this theory. They questioned my sources and, although I couldn’t remember specifically where I’d heard this info, I knew this was one of the many culinary tidbits that I had gathered over the years. I seized the opportunity.

In the culinary world there are two “bibles” that we all use when we need true answers about food, technique and history. They are Larousse Gastronomique and On Food and Cooking by Harold McGee, who also brought us the science behind our turkey test. The first is a classic; a culinary encyclopedia of sorts. The latter covers a more scientific side; the how’s and why’s. Neither one let me down. Both affirmed that authentic confit only gets better with time – we are talking a suggested 5-6 months.

After relishing my triumph, it was time to do my own test. Harold and Larousse certainly did their research, so why shouldn’t I? I confit’d a batch of duck legs and stored them in our walk-in cooler for 4 weeks. Over the course of the next month, I researched more contemporary mentors for their view on this theory. 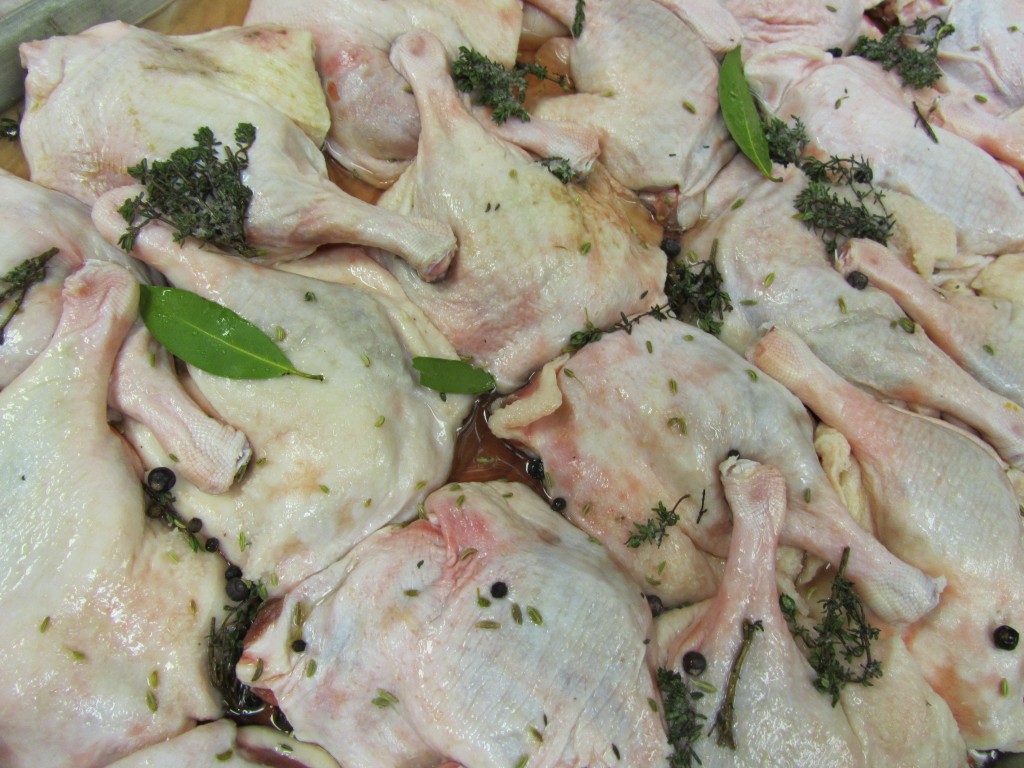 In The Zuni Café Cookbook, Judy Rodgers writes that “confit will improve during the first month and then keep for months longer.” And I’m not typically one to brag, but in the Bouchon cookbook, Thomas Keller states, “confit is hard to resist straight out of the oven, but it’s even better cooled in its fat and refrigerated for up to 6 months.”

On Week 4 of my experiment I confit’d another batch of duck legs, using the same recipe and did a blind taste test with five others.

It only seemed right to invite Sonoma County’s own “Duck Man”, Jim Reichardt, from Sonoma County Poultry / Liberty Ducks, to add some insight. I asked Reichardt where his favorite duck confit was served and he replied, “I don’t actually order it because most people don’t age it properly and I have been disappointed.” 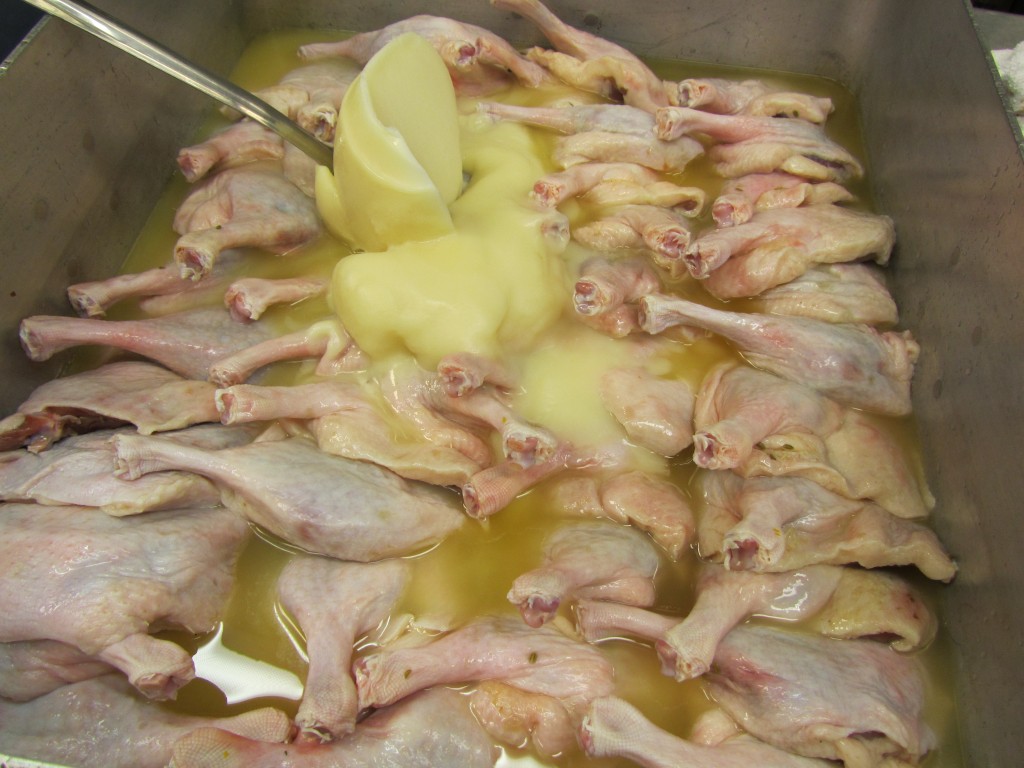 This unsolicited response only fueled my quest; so we tasted.  Four out of six, including me, chose the aged duck as our favorite. The overall consensus was that the 4-week aged duck was juicier and more flavorful with a deeper saltiness. We also tried both with Vintner’s Reserve Pinot Noir and found that the more aged confit paired best.

Before I Tebow or do my victory dance, I have to admit that the findings were not as intense as Chef Justin, Jim and I hoped. Our culinary senses steered us to assume the older duck would be much richer and obviously different. Even though the majority chose the aged confit, we concluded that the difference was not so extreme as to change our methods to include the 4 week age.  Jim did say that his past experiences had elicited a more drastic difference in flavor, but after our taste test he was swayed. 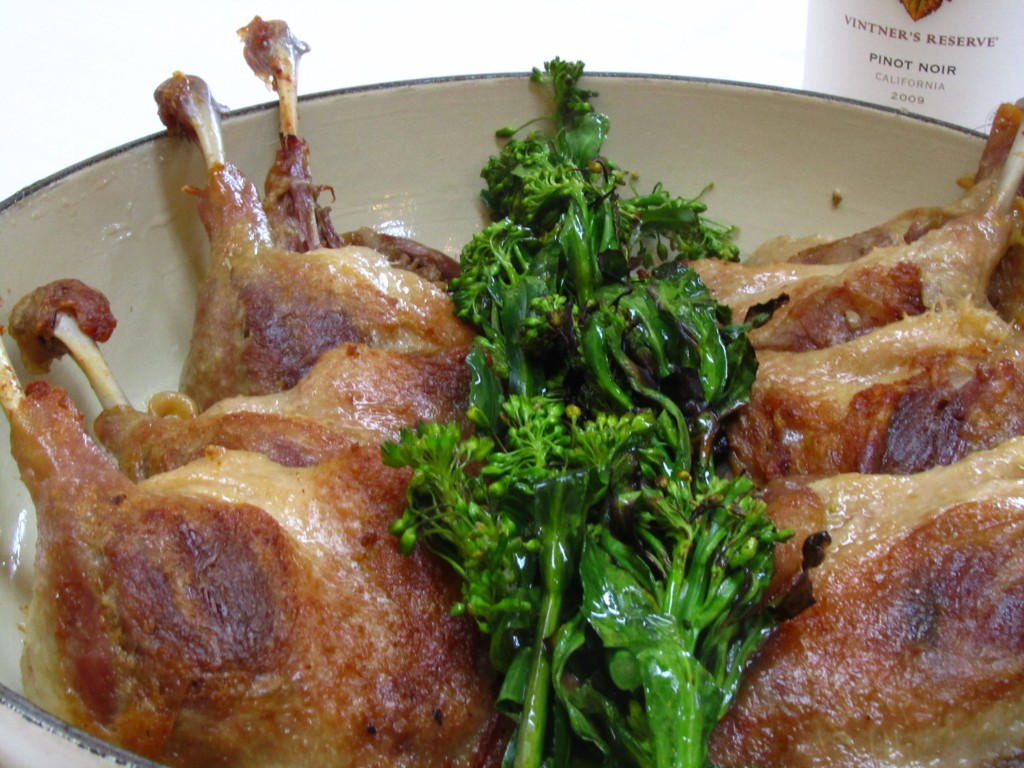 Duck confit is a classic dish made by salting duck legs for a day, immersing them in fat and then cooking them at a low temperature for a long period of time. It was originally used as a preserving technique when refrigeration was not available. The result is succulent, juicy and rich. Our version, using local duck legs from Liberty Ducks, has fresh thyme, bay leaves and juniper for additional flavor.  Try our recipe below with a glass of Vintner’s Reserve Pinot Noir.