How do oak barrels affect Chardonnay? To take a line from Elizabeth Barrett Browning's Sonnets from the Portuguese, "Let me count the ways."

The most obvious way that oak barrels affect Chardonnay is by imparting oak-driven flavors, such as toast, spice and caramel. That's right. Chardonnay is not picked off the vine tasting of these flavors! However, many wine lovers assume that Chardonnay is synonymous with "oaky" flavors because new oak barrels are frequently used to make Chardonnay wines.

Winemakers craft Chardonnay in oak barrels to create additional flavor complexity and textural interest. They can do this because Chardonnay is one of the most malleable white wine grapes.

Whether a Chardonnay tastes a little, a lot or not at all oaky, and it will also taste of other things. Chardonnay's extraordinary geographic flexibility, structural anatomy and high tolerance for winemaking processes means that every Chardonnay tastes unique, even when oaked. 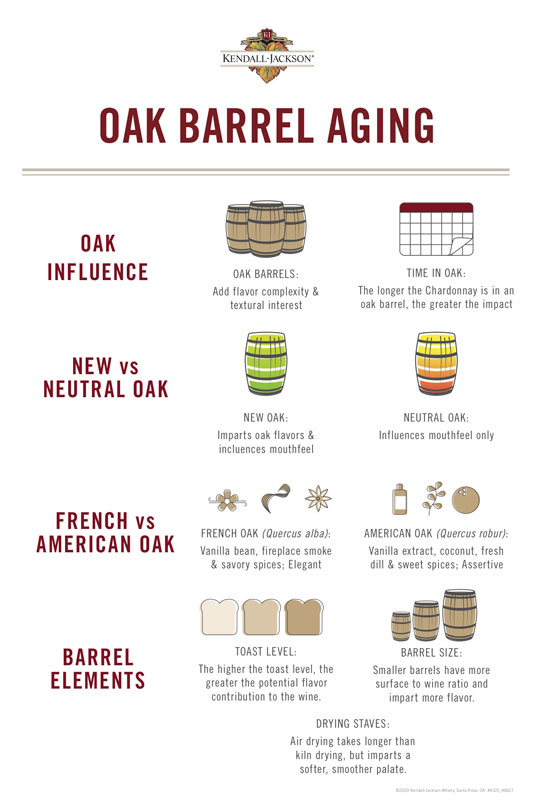 Like all wines, every bottle of Chardonnay starts in the vineyard. And, Chardonnay vineyards are everywhere! Though originally hailing from France's Burgundy region, Chardonnay grapes are grown across the globe - in 41 countries at last count in 2017 by the International Organization of Wine and Vine - in an unbelievable array of climates, soils, altitudes and aspects.

Chardonnay's genetic composition gives it the architectural bandwidth to be the multifaceted grape that it is. Geek alert: Chardonnay was born of a natural crossing of Pinot Noir with the now near-extinct Gouais Blanc at least four centuries ago. 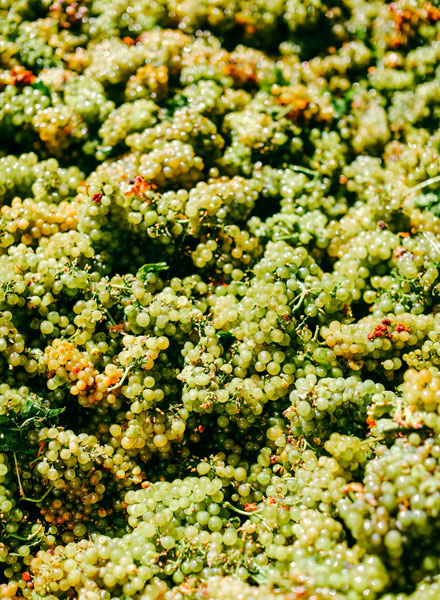 Acidity is the backbone of Chardonnay wines. Chardonnay has lots of it. This steely, structural strength is one of the reasons that Chardonnay can age so well.

Texture is the flesh of Chardonnay wines. Chardonnay gives generosity to the palate, which provides a buffering effect on to the grape's acidic backbone. This inherent texture allows Chardonnay to absorb the "work-out" of certain winemaking techniques (see below). A Chardonnay wine palate can feel as feather light or memory foam dense as a range of pillows, but Chardonnay tends to be middling to weightier.

Chardonnay fruit flavors on their own can display a wide range of aromas. Starting on the tangier end of the fruit spectrum, Chardonnay shows lemon and grapefruit. Inching up the ripeness scale flavors like melon, peach and green apple turn up. Taking it up another notch of ripeness, Chardonnay delivers pear and yellow apple. The ramp up continues, heading into baked apples and cobbler fruits as well as tropical fruits, like pineapple.

Chardonnay tastes aren't limited to fruit flavors. When grown in cool climates, they also display what wine geeks call "mineral" notes. That's an overarching term for stone-like influences that may be easier to relate to when thought of as oyster shell, chalk and pencil shavings (if you're old enough to remember those!) Chardonnay wine aromas can also smell earthy, like freshly-turned dirt in the garden or sliced mushrooms.

Much of the Chardonnay we drink is a varietal, still, dry, white table wine. Because of the popularity of the oaked style, we tend to expect that Chardonnay has oak barrel flavor. But, Chardonnay is much more of a ninja than that!

Take unoaked Chardonnay, which is increasingly trendy. (It can also make blended wines, sparkling wines and sweet wines, too, but that's not our focus here!) Unoaked wine, like the most recent vintages of the unoaked K-J Avant Chardonnay, delivers nothing but the purity of the Chardonnay wine grapes. Oaked Chardonnay bottlings, like America's favorite Chardonnay, the Kendall-Jackson Vintner's Reserve, incorporate the use of barrels - constructed from oak - to expand Chardonnay's complexity. (Click here if you're thirsty to learn more about unoaked versus oaked Chardonnay.)

Thanks to its wide spectrum of inherent aromas and pliable structure, Chardonnay is a winemaker's playground!

A winemaker's choice of fermentation vessel type and size greatly affects the resulting Chardonnay. A fermentation in a stainless-steel tank produces a more structured, firmer wine than a fermentation in a wood barrel or wood tank. A winemaker using stainless steel fermentation also is trying to preserve as much as possible the fruit character coming right off the vine.

Wood is a porous material that allows for an oxygen exchange with wine. This basically stretches and invigorates the wine's palate, creating a broader mouthfeel and adding texture. If new oak barrels or once-used oak barrels are employed, oak flavors will also be imparted to the Chardonnay. Older oak only changes Chardonnay's mouthfeel. If well maintained, winemakers can reuse oak barrels for wine for many years - even decades!

Some winemakers combine stainless steel fermentation with new oak barrel aging. These wines have a more marked oak flavor. Fermenting in new oak infuses flavors while simply aging in new oak delivers more aggressive flavors. The first is like smoking meats while the second is like grilling them.

Length of Time in Oak

Aging Chardonnay wines in oak barrels is also affected by how long the wines are in the barrels. Like with smoking foods, the longer the Chardonnay is in an oak barrel, the more noticeable the impact will be. So, how long to age wine in oak barrels? It depends on the style of the wine being made. Chardonnay can be aged briefly - even just three months - or "over vintaged", meaning that has been kept in the barrel longer than the following harvest, or over a year. 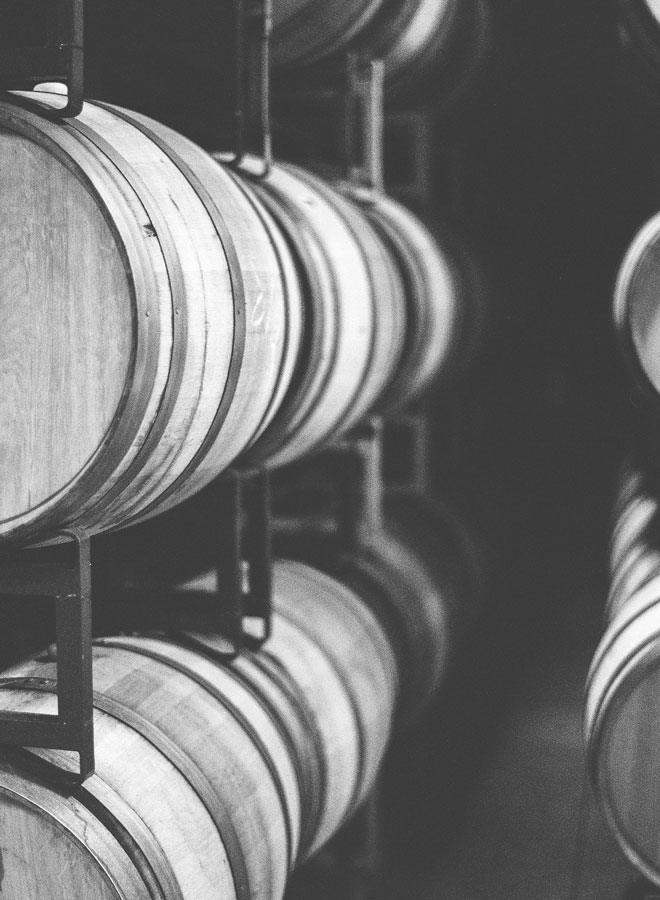 There's another Chardonnay winemaking technique to enhance flavor and texture: battonage, the French term for stirring the yeast sediment. Once the yeast have converted sugar in grape juice to wine, they drop to the bottom of the fermentation tank. If stirred up, they help impart weight and dough-like flavors to the wine. Think of how the hot chocolate can precipitate chocolate to the bottom; stir it up and it's richer and more flavorful! 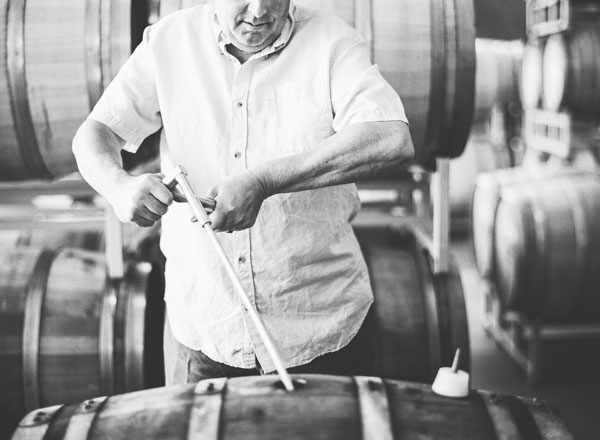 This is particularly effective in oak barrels as they tend to be much smaller than large tanks; it's easier to combine the sediment and wine. In fact, winemakers are even starting to use stainless steel barrels to improve the distribution of yeast sediment in their wines. This innovation is like a new toy on the playground!

Wood wine barrels are most often made from oak, and the two most common oak origins are French and American. French (quercus alba) and American (quercus robur) oak are different species, so they impart different flavors. The different possible oak origins within France and the US also change the oaks' subtleties. Trees have terroir, too!

Once felled, trees are cut into long staves then dried. Drying can take place in the open air or in kilns. Air drying oak takes longer but creates barrels that give Chardonnay a softer, smoother palate.

When the staves are ready to become barrels, two decisions must be made: the size and the toast of the barrel. These both impact the style of a Chardonnay wine. For example, smaller barrels have a greater wood surface to wine ratio, so they will impart more flavor while they are new. Similarly, the toast level of the staves, which must be bent by heat to form a barrel, will determine how much flavor impact the barrel may have. Just like with your toaster oven, the higher the toast level, the greater the potential flavor contribution to the wine. 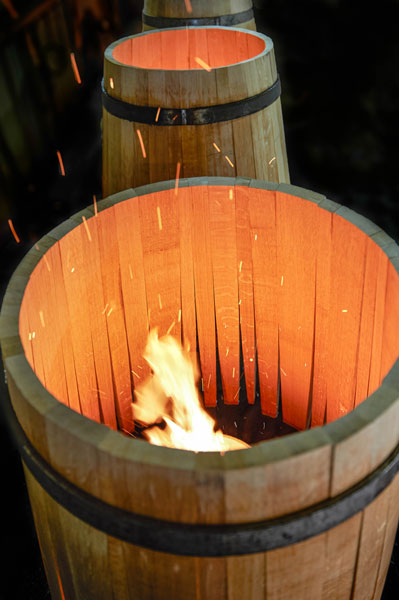 Just as certain seasonings work well with some foods but not others, Chardonnay tends to blend best with French oak. French oak tends to give tones of vanilla bean, fireplace smoke and savory spices. American oak leans toward vanilla extract, coconut, fresh dill and sweet spices. In Chardonnay, French oak tends to be more elegant while American oak is more assertive.  K-J so strongly prefers working with French oak - for all of its wines - that founder Jess Jackson partnered with a cooperage in France!

Time for a Glass of Chardonnay

Because Chardonnay is universally popular, worldwide plantings continue to rise. While we tend to think of Chardonnay as an oaked wine, unoaked Chardonnay is splashing into our glasses more often. Because, even in an oaked Chardonnay, there is much more complexity than just the flavors derived from a forest! Moreover, the impacts of oak barrels on Chardonnay vary widely based on the origin, drying method, toast level and barrel size, not to mention whether a wine was fermented and aged in the barrel or made in another way. The unique versatility of Chardonnay offers an endless array of styles. It's about time we enjoyed one!