Now that Halloween is in the bag, holiday meal planning is in full swing across the country. Many of us look forward to the traditional trappings and the centerpiece of the meal: the turkey. For holiday hosts, if the bird is dry there’s no hiding their disappointment, even over an endless stream of compliments from the guests. One way to avoid the foul anxiety of a dry, flavorless bird this year is to buy a heritage turkey.

Keeping a turkey moist and flavorful, especially the white meat, is more than a culinary challenge, it’s a genetic challenge. The Broad Breasted White breed of turkeys has been the choice of the large corporations that began selectively breeding them and dominating turkey production beginning in the 1960’s.

The focus on this breed happened because of its exceedingly large breasts and ability to grow to over 30 pounds in just four months – and it tops-out at 50 pounds on a minimal amount of feed. They have also been commercially favored because the feathers are white, making the pin feathers less visible when the bird is cleaned. So far they sound great; these turkeys grow fast and cheaply, look nice when we bring them home and more have white meat than dark, matching the American palate. 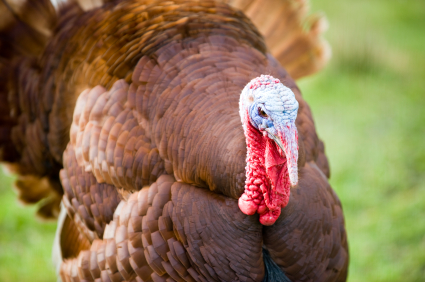 Now for the bad news. Broad Breasted Whites have such oversized breasts that they can’t breed without artificial insemination, have problems walking, are prone to disease and, according to most experts, they’re lacking in flavor and moisture.

It’s time for a back to the future moment staring heritage turkeys and a happy ending to our story. For two thousand years various strains of wild turkeys were domesticated in North American family farms as both a source of meat and pest control because of all the insects they eat. These breeds are known today as heritage turkeys.

In order to qualify as a heritage breed, the birds must mate naturally, have a long, productive lifespan and a slow growth rate. They’re prized for the wonderful flavor and moisture. With the advent of industrial production and adoption of the Broad Breasted Whites, the heritage breeds were all but extinct by the start of the 21st century. In 1997 there were only 1,500 breeding birds left in the U.S. compared to the 280 million turkeys grown commercially each year. 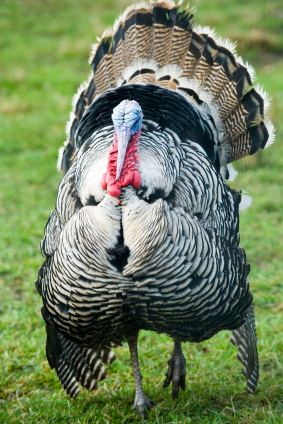 Livestock conservancies, the slow food movement and small framers stepped in to help to restore most of the heritage breeds to healthy populations and protect the biodiversity of our food chain. These birds display beautiful plumage and are mostly grown free-range and organically.

These old breeds cannot be pushed to grow quickly the way most commercial turkeys can. They take 2 – 2 ½ years to come to maturity and, therefore, are rather pricey. But they are praised by chefs and food critics as the reason people originally regarded eating turkey as such a special treat. If you can’t spring for a heritage bird this year a great alternative is a turkey that is free-range or pasture raised, vegetarian fed, and antibiotic and hormone free.

If you get the chance to partake in a holiday feast of heritage turkey this year, what you’ll notice most it the great flavor and moisture. Ask your butcher or specialty grocer if they have, or can order you, heritage birds. I’ve also seen them on-line from a variety of family farms. Cooking advice from a source like Local Harvest is recommended. You’ll be thrilled to know you can get rid of all the gimmicks like tin foil or brining to keep the bird moist, tender and delicious – they’re just naturally that way.