To prepare the fregula and corn: One at a time, stand each ear of corn upright on its stem end and, using a sharp knife, cut straight down between the kernels and cob to remove the kernels, rotating the ear after each cut. Transfer the kernels to a large colander with a base and set in the sink.

In a medium pot, combine 2 qt water and 2 tablespoons salt and bring to a boil over high heat. Add the fregula, adjust the heat to a simmer, and cook for 8 to 10 minutes, until tender.

Remove the pot from the heat and pour the fregula over the corn, allowing the hot water to drain through the kernels. Drain well and let cool to room temperature.

To assemble the salad and serve: In a serving bowl, combine the fregula and corn, tomatoes, 1 cup of the purslane leaves, the chives, oil, vinegar, and 1 tablespoon salt and toss to mix well. Taste and adjust the seasoning if needed. Sprinkle the remaining 1 cup purslane leaves on top. 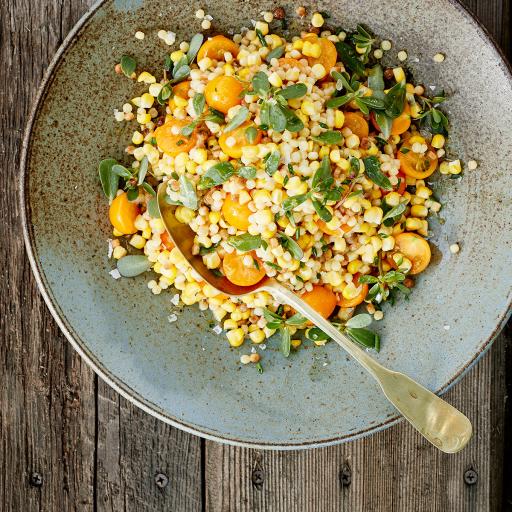